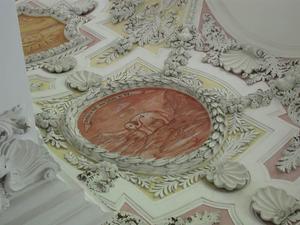 All the reddish pictures in this corridor refer to the Immaculate Conception. The elephant is a symbol of chastity. Here it has been wounded seven times (for the seven sorrows of Mary – the Catholic Encyclopedia article, as so often with these church guides, a great help) but not hurt. – At the top left you can just see the edge of a fish inside a star, representing Mary as Stella Maris (Meerstern – according to the Catholic Encyclopedia a mistake, but the real etymology seems unclear). 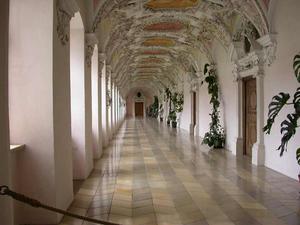 This corridor gets more light than the other because the windows are clear glass. This is where the local priest has his office, probably as nice inside as outside.