Slightly off topic, but now it is lawful in the Netherlands to buy small amounts of cannabis for medicinal purposes, perhaps some light should be cast on the difficulty of getting superior tomatoes – at least in Britain. The Independent reported on August 19th. I think things are slightly better in Germany, though I recall that manufactum sometimes sells potatoes ‘for cooking only’ that are clearly seed potatoes of a variety of obscure types.
Here is a photo of some nice tomatoes in an Italian supermarket. 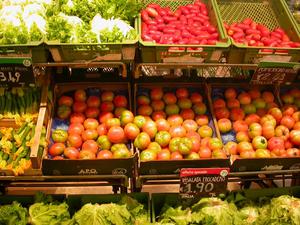