David Bernstein, of The Volokh Conspiracy, reports that the Royal Opera House, Covent Garden, is obliged by law to have signing for the deaf at some performances, quoting Andante(who in turn quotes the Mail on Sunday):

Now many opera-lovers, who pay up to £150 for their seats, are dismayed by the distracting gesticulations. One disgruntled visitor, author and former newspaper editor Max Hastings, accused the institution of ‘bootlicking’ after witnessing the disruption of a ‘brilliant’ performance of Madame Butterfly last month.
‘The evening was marred only by the distraction of a madwoman waving her arms at the edge of the stage,’ he wrote in The Spectator magazine. ‘To get money from New Labour, every arts institution must prove itself “accessible”.’

They do apparently have surtitles anyway (I’ve never experienced surtitles, but I found one picture of them at redludwig.com.

I will add a photograph of the system used in the Metropolitan Opera in New York, where there is a small screen in front of every seat in the house where you can choose to see titles if you want. 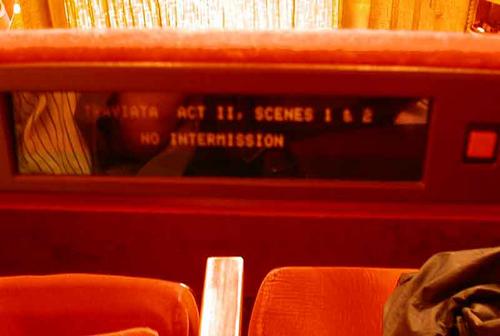