There is an interesting Christmas market in the old town in Fürth, but it hasn’t started yet. 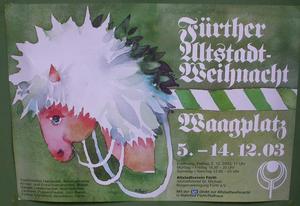 However, the Nuremberg Christkindlsmarkt (Christchild market) did open on Friday. It can be seen here (German and English). It starts with a teenage schoolgirl dressed up as a sort of angel, called the Christkind but rather too old for swaddling clothes, reciting a rather weak speech about the Christmas spirit. (Why not have a boy for once?). She doesn’t have to go to school for the next few weeks but has various official duties. Here is an excerpt in German and translation from the website (translation NOT by me!):

bq. In every year, four weeks before the time
When Christmas trees we decorate, and everyone awaits the feast,
Here on this square, just as of yore, this market does appear,
Which up and down the country they call Christmas Markt.
This little town is built from wood and canvas
Its splendour’s short, will soon be gone,
But yet it is eternal. My market is forever young,
As long as Nuremberg does exist, as long as you remember it.

The booths sell a restricted range of things: Christmas decorations, prune figures, mulled wine, toys. Apparently in the old days, many other things were sold, such as braces and shoelaces, but these were banned. I wonder if that was in 1933, which is the date when the Christkind’s Prologue and the market as it is today were created – part of the Third Reich propaganda of Nuremberg as the traditional city of German Christmas.

Meanwhile, there is a more everyday Christmas market in Fürth on the Fürther Freiheit. One presumably Christmassy touch is a pen with some sheep. They were soaking wet to the touch but didn’t seem disturbed by it. 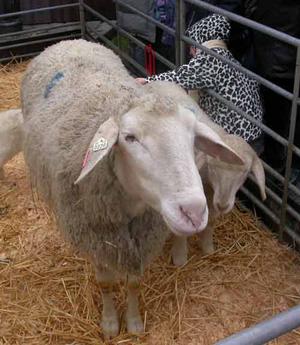