A couple of years ago I bought the CD version of the Collins German Dictionary Unabridged (DE>EN and EN>DE, 4th ed. 1999). I have twice reported trivial inconsistencies with the paper version to Acolada, and both times I have received a new CD and a letter of thanks. It’s good to know that there’s someone looking after this CD. Of course, I suppose if they said it was the 1999 edition, they have to deliver that! Most recently I received a new CD on 7th January this year.

The dictionary runs under the same interface as the Dietl/Lorenz law dictionary. I could also have the new Ernst CD, Wörterbuch der industriellen Technik running under that interface, but I don’t use Ernst very often so I think I will get the paper DE>EN.

Among other dictionaries, Acolada also have Potonnier DE>FR and FR>DE, Wörterbuch Wirtschaft, Recht, Handel. Potonnier is a beautiful law dictionary because of all its definitions included in the entries, almost useful enough for someone who knows no French. It looks like the model of what a bilingual law dictionary should be.

The Collins dictionary is also known as Pons-Collins, because in Germany it has been (but is it still?) published by Pons, although it originated with Collins in the UK. This leads to some confusion, in that Pons has its own dictionaries that are then confused with Collins. There is a dictionary of the same size as the Collins produced by Pons in 2001, I think using the same database as Collins, but certainly different, called Pons Großwörterbuch für Experten und Universität Englisch . The cover quite clearly says ‘Vollständige Neuentwicklung’ (a completely new product), and the website adds ‘2001’. When I looked at it I had the impression that it might be more oriented towards Germans than the Collins. 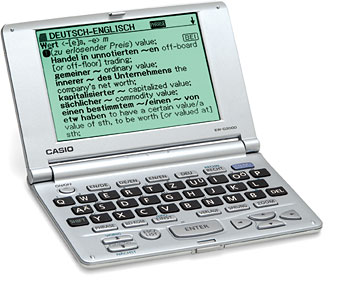 Last autumn, Casio produced a small dictionary device, Sprachcomputer EW-G2000 für Deutsch und Englisch, price 249 euros. This contains three reputable dictionaries: Pons Großwörterbuch (the 2001 product mentioned above, CD dated 2002), the Oxford Advanced Learner’s Dictionary (6th ed. 2000) and the Duden Deutsches Universalwörterbuch (5th ed. 2003). More information on Casio’s German site. There’s also a bigger on, EW-G2010, with the New Oxford English Thesaurus on it too, and a smaller one, EW-G100, with only the Pons and the Hornby.

It’s a shame they couldn’t have the Longman Dictionary of Contemporary English. Apparently many Germans have fond memories of the Hornby Advanced Learners Dictionary, probably the first of its kind, which is very good too – but the LDCE, the work of a team from the beginning, is one of the best English dictionaries full stop. There was a review of the device in MDÜ 4-5/2003 – it refers to the Pons as ‘weithin bekannt’, and here again, I think the writer (Karl-Heinz Trojanus) is confusing the Pons with the Collins. – However, this device looks worth having for those who might need full language support when travelling (I have my doubts about interpreters, because I think they would need something more specialized).

Still, it’s not as bad as in the USA, where the word ‘Websters’ is not copyrighted and any dictionary can call itself a Websters. There’s a big Websters often sold off cheap in Germany that is really Random House second edition (as opposed to the newer third edition), and people probably think it’s Merriam Websters when they buy it.