According to Herbert Schlicht, the Fürth bird expert, the wrong stork has arrived at the nest in Gustavstraße (article in Fürther Nachrichten).

The pair of storks that have used the nest for some years now (and brought up 4 young in 2001) are not expected back for a week. According to Schlicht, storks aren’t stupid. Some of them only fly as far as Spain, Israel or Turkey and get back earliest. But the storks that come all the way for Africa are stronger and they fight the usurpers for the nest. Last year, for instance, the nest was so damaged after all the fighting that no eggs were hatched at all.

If you click on this picture to enlarge it, you can just about see some white feathers slightly left of centre in the nest. 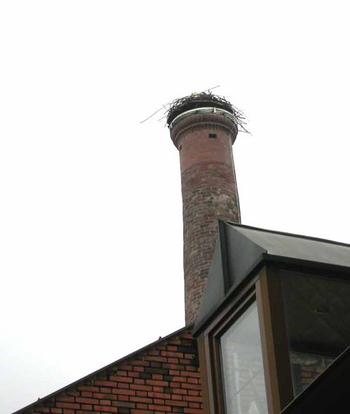