Some other language blogs have been posting interesting language-related entries that I haven’t commented on.

Michael at Translate This! refers to my entries on the Collins German Dictionary. His first job after university was as a compiler for the Collins Dictionary in Glasgow.

Robin Stocks at Carob, after recovering from the financial-statement-translating season, has had a number of useful entries and links for financial translators, starting on May 1st.

Robin had a photo in January that I meant to comment on. 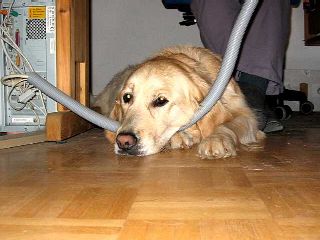 What struck me, of course, was the tidiness of the flexes. I would like to emulate this, but I think that should have started with better-designed electricity fittings.

Gail at Open Brackets took up another entry of mine and wrote about quality or lack of quality and the translation market. There are some interesting comments, too, including some about lack of translation budgeting in the humanities. This topic struck me because I translate guides to churches and castles and sometimes a publisher recommends me to someone at a university. For instance, this week someone with a whole book on cathedral architecture wanted a quote. There was a grant for £5000 for translation, but the length was 140,000 words. If I had taken a German publisher’s line of 60 strokes and publisher’s price of 1 euro per line (OK, some pay half), that would have added up to 17,500 euros. A translator well up in the vocabulary of these cathedrals, and they weren’t cathedrals in Germany, might have made good progress on something like that, at the 1-euro-per-line price. But even then, the translator would not be able to translate for 70 working days without risking losing other clients.

Actually, I should probably have quoted per page, which is the usual method for books (but not for the ones I’ve done myself). Then I’d want to remind myself what the usual page rates paid by publishers are.

Here’s a quote from Gail’s entry:

‘There was a comment to a recent posting here that I found quite telling:

bq. Im a contract writer for an insurance company and am responsible for coordinating the translation of said contracts. I have to confess to feeling rather frustrated when my translator comes back to me asking what we mean when we say benefits payable on the death of the spouse will be payable to the employees estate if the employee is deceased and theres no beneficiary designation. Hes trying to understand it, for heavens sake. I, on the other hand, dont want to understand it, as it just gives me a headache.
 cmb

Im afraid my advice to cmb would be to get a new translator:the current one apparently stumped by very basic terminology.’

Gail also has a wonderful quote in the entry prior to this one. She found a description of her weblog at Force Monkeys:

bq. Its like a bunch of college professors got together and smoked pot for a week. They bring up a bunch of stuff you probably wouldnt think about. I dont recommend this if you dont have a very large vocabulary.