When Lynne Truss’s ‘Eats Shoots and Leaves’ appeared in Britain last November, I was sure I didn’t want to read it, because the hype was suspicious.

But I had the impression that more and more people whose opinions I thought I trusted, and even including Americans (it had not then been published in the USA) raved about it, I was driven to buy a copy, a big mistake, for I have not been able to get on with it – but at least I know that now!

It sold remarkably well – 700,000 copies? It was in good time for the Christmas market, so I wonder if 700,000 copies have been read. The book even has its own website. Anyway, now I have seen a few less excited discussions, I suppose my work has been done for me. Scribe at The Discouraging Word was not 100% in favour, although his entry was tongue-in-cheek against the denigrators of strict punctuation. (Picayune punctuation rules, May 7th, and see also January 6th. I see the American edition has ‘a foreword by Frank McCourt, Author of “Angela’s Ashes”‘!

Well, it’s not the author’s fault that the book has been overhyped, and she certainly deserves admiration for her commercial success – I remember being told this once when I was complaining about another great commercial success, Peter Mayle’s ‘A Year in Provence’ (it was long my desire to write a satire on this called ‘A Year in Franconia’, but I realized no-one would have wanted to buy it).

I attempted to teach punctuation for twenty years, and this must be part of my reason for irritation. Every so often a new and interesting book on punctuation comes out, and there are a number of good old standards, so why should this one, that consists at least 50% of extraneous material, be so praised? I know many people like to read something light and amusing, but I prefer my punctuation discussion less packaged. The problem starts with the title joke, on the back cover. I have read this joke a number of times on the Internet over the years, and I too thought it was funny the first time I read it, but Truss spoils it. She’s one of those people who can’t tell jokes. ‘The panda produces a badly punctuated wildlife manual…’ This punctuation reference, cheekily inserted to refer to the book, does not occur in the original joke and it is a spoiler – not only superfluous but detrimental to the humour. ‘The waiter turns to the relevant entry and, sure enough, finds an explanation.’ – Good jokes don’t need ‘sure enough’ pushed in, nor “confused waiter” instead of just “waiter”. (For the joke as it appears, see continuation of this entry).

There was a Guardian review by Stephen Poole on December 13th 2003 that I concur with. (LATER NOTE: not sure if I concur about ‘Eric’ Fowler – who he?)

bq. Truss tries very hard to be funny, and she is often successful. …And if we are to be brutally honest, her regular quotations from others who have written on this subject – true giants such as Eric Fowler, Kingsley Amis or George Bernard Shaw – serve only to show that pedantry works best when allied to an economical wit and rock-solid prose, rather than Truss’s own consistent style of overheated whimsy, which becomes oppressive even in such a brief book.

The question I am left with is: who was the book written for? On the dustjacket it says

bq. This is a book for people who love punctuation and get upset about it.

I wonder. It seems to me it is a book for people who haven’t thought much about punctuation and haven’t got enough to read. Definitely a popularizing book, but popularizing by ladling jokes on. The picture of the author inside the back cover says a lot: 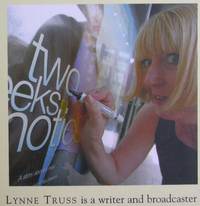 From the back cover of Lynne Truss’ book:

A panda walks into a cafe. He orders a sandwich, eats it, then draws a gun and fires two shots in the air.

“Why?” asks the confused waiter, as the panda makes towards the exit. The panda produces a badly punctuated wildlife manual and tosses it over his shoulder.

The waiter turns to the relevant entry and, sure enough, finds an explanation.