Here are some pictures from Fürth that I’ve been meaning to post for some weeks now. Click to enlarge. 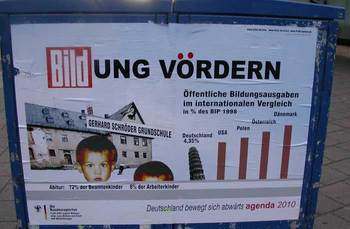 This poster seems to be saying too much at once. It seems to come from attac, an anti-globalization organization. What is the message? Germany did badly in the Pisa tests and isn’t spending enough on education, and it’s all Gerhard Schröder’s fault. But the Bild newspaper seems to be involved too. 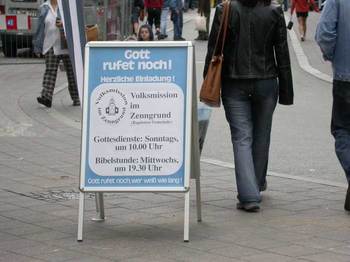 Here’s a religious one, using the somewhat archaic rufet instead of ruft (God is calling), but incorporating a capitalization error (Sonntags/Mittwochs for sonntags/mittwochs) and a hyphenization one (Baptisten Gemeinde). 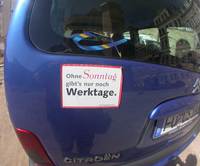 Finally, this car sticker is directed against the extension of shop opening hours: Without Sunday there would only be weekdays (and vice versa, I imagine).