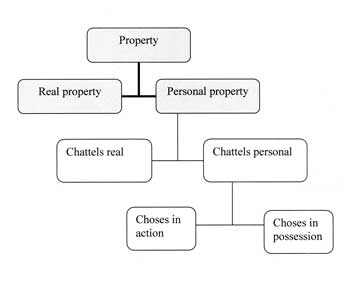 Real property is land. It’s called real because a person dispossessed of land used to be able to claim the land itself (res: thing – the Germans have a term dinglich – ‘thingly’ – that is close to this meaning). This means the same as the immovables /immoveables in Roman law systems: Immobilien, Liegenschaften, Grundstücke.

Personal property is everything apart from ‘ownership’ of land (actually you can’t own land in England and Wales, because it belongs to the Crown, but let’s forget about that for the moment). It doesn’t mean movables, therefore – it’s a wider term. It breaks down into:

Chattels real: leasehold interests in land – called real because they have to do with land, called chattels because they aren’t land.

Chattels personal: a superordinate term for:

Choses in action: debts, cheques, claims, patents. These are forms of property you may have to take legal action to enforce.

Were I to return to the interesting question still pursued at Language Log as to when and if a fish changes its status without being smoked, and what possessed the Irish Senate to consider this, I would need to start with this diagram. Unfortunately I still have to do some work today.

It was hard work doing this diagram. The slightly grey background of the top three fields was not intentional.