The Moscow Times reports on a translators’ club that meets once a month in Moscow.

bq. Meeting once a month at the Nikolai Ostrovsky Museum, the club is free for all comers. Regulars range from university students to Zoya Zarubina, an interpreter to Josef Stalin and Franklin Delano Roosevelt at the wartime Tehran and Yalta conferences. Each get-together begins with a lecture followed by wine and socializing. Also available are the club’s magazine, Mosty, and books published by the organizer, R. Valent, which specializes in translation manuals. …

bq. The Translators’ Club next meets Nov. 24 at 5 p.m. at 14 Tverskaya Ulitsa. See www.rvalent.ru for details.

(Via Taccuino di traduzione and the Literary Saloon)

The European Company or Societas Europeae (this adding yet another language) is an optional Europe-wide company form. FAQ here.

Google sometimes gives a range of sites tailored to what it thinks the user wants. (I went on at great length about this over a year ago).

I haven’t been too worried about censorship, as long as it isn’t relevant to what I’m researching. But today, I wanted a recipe for kofta curry. I did not want a German recipe, because curries hit Germany later and the recipes are more often simplified. For all I know they may contain a tin of pineapple.

But I didn’t expect to get a German recipe – I was using the Google toolbar in Firefox and it went to google.com.

I entered kofta curry. The first hit was in German, from Kenya. There were Indian and Pakistani nationals in Africa, and the recipe looked OK, except that there was a note defining garam masala and telling you if you couldn’t find it to use any commercial curry power instead – as though garam masala and curry powder were anything like each other.

The second hit was also in German. Actually, it was the same recipe, as I noticed first from the curious inclusion of 600 ml chicken broth.

At least there’s no chicken broth in it.

Anyway, a search on
kofta curry site:uk
did the trick. Not sure about the milk, and there don’t have to be almonds, but the amount of green chilli can be varied and other ingredients taken from other versions. I think kofta curry is bit like chop suey, not the most authentic Indian recipe.

At all events, with English apparently becoming the global language, I feel a bit badly done by. What if this had been a recipe where the USA was the best source? Then the site:uk solution wouldn’t have worked, and it doesn’t work for all sites in the uk as it is. I see the toolbar offers special searches, which include my country and my local. An English language search might do here. But is that the end of my options?

German sentences are longer than English ones, in general. (Must find statistics)
So they sometimes need to be broken up on translation into English.

Maybe not in statutes (because German statutes are sometimes quoted by the half-sentence, or alternative – so footnotes would be needed if a big change were made)

Maybe not in contracts, for the same reason.

You have to be careful not to distort the meaning, but that goes without saying. It can be difficult – I understand my client with very difficult sentences in judgments who doesn’t want the number of sentences changed, and Iunderstand – the meaning might very well be affected.

However, some clients don’t want sentence length changed. Recently, I heard of a client who rejected the breaking down of sentences in a client brochure on financial services – some of the German sentences had 45 words.

The answer to this one is to break the sentences down, but join them by a semicolon rather than splitting them with a full stop (thanks to Gabi!).

I asked on the pt mailing list at Yahoo if anyone had techniques for breaking sentences down, but the only answer I had on that, from Robert, agreed with me in doing it by feeling. He too had had a comment from another translator, a non-native speaker of English, that splitting or combining German sentences undermines the ‘scientific’ nature of the text (a text on history). (Yes, sometimes you do have to combine sentences).

So there are at least two non-native English speakers around who are convinced German sentences should be left alone.

Is there a contrastive treatment of the two languages that could help here? Might books on writing simpler German offer ways of splitting sentences?

I have looked for some examples in my own files, but only by searching for sentences where I have introduced a semicolon. Other examples I’ll have to watch out for as I work. I set out three examples in the continuation: END_OF_DOCUMENT_TOKEN_TO_BE_REPLACED

The decision of the Federal Constitutional Court of 14th October 2004, which was widely commented on in the press – it deals with how far German courts are obliged to enforce decisions of the European Court of Human Rights – is online in English as well as German (there was an English press release at the same time as the German one on 19th October).

Opinions seem to be polarized on this decision. It doesn’t seem so revolutionary to me. We have always assumed that decisions of the ECHR are to be enacted in law by the UK parliament, not followed by the courts before that.

For German references to the case, see HandakteWebLAWg oder staatsrecht.info.

This is the supermarket where I sometimes do my food shopping, Edeka, not a garden centre or anything like that. And on the right you can see the green watering-cans to take to the cemetery. Is this a typical German thing? 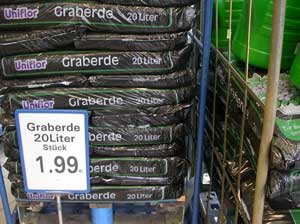 LATER NOTE: Ann Stewart-Bendorf reports:
The graves are so well tended in Germany because there is a legal obligation to keep them orderly for a certain period (in statute it states 25 years, where my parents-in-law are buried it is 30 years).

(presumably that is for Baden-Württemberg – Land legislation)

This is a names story, so I did my duty and combed Wordlab, but not a trace did I find.

There was a discussion on John Doe and equivalents in other languages on the FLEFO forum, which still creeps on at Compuserve and is even accessible on the Web – maybe here or here. I was thinking about how I only ever met John Doe and Richard Roe in connection with land law, and I found an article at Verbatim that explains this. It also quotes other languages and the use of John Doe in a wider context, GI Joe, Tommy Atkins, and Otto Normalverbraucher.

bq. Doe and his alter ego, Richard Roe, have been used by English speakers, if not from time immemorial,2 at least for seven centuries: They first appear in writing as names by way of example in an account of a bill providing for the orderly ejectment of tenants by landlords, debated in Parliament under Edward III (r. 1327-77). Modern British law, when additional names are needed, will call upon John Stilesand Richard Miles; a female somebody is given the name Mary Major.3

The article also links to funnyname.com. This has a lot of merely rude names, which pall after a while, but also a category Anonymous, which gives John Doe in other languages.

I also remember once coming across Tommy or Timmy Toe, both an anonymous name in a trial and a singer. Some Googling revealed the following excellent quote via The Volokh Conspiracy:

bq. Most people are familiar with habitual litigant John Doe; I’m told that he’s the grandson of the noted author Anon. Richard Roe is pretty common, too. Paul and Paula Poe occasionally make an appearance, for instance in Poe v. Ullman, the 1961 case challenging the constitutionality of a ban on contraceptives. (That case was dismissed on procedural grounds, though the issue reappeared in the Court in the famous 1965 Griswold v. Connecticut case.)

Here’s a Swedish-English translation blog, currently on hiatus (I should be on hiatus too):

bq. Lagomduktig documents a quest to unravel the mysteries of translating the Swedish language. The views expressed on this site are our own and do not reflect those of our employers or their clients. ©Copyright Billy McCormac / Paul O’Mahony email: billy.mccormac@gmail.com / paulomahony@gmail.com

Germany is gearing up for a visit from the Queen next week. This is the question of the day in Fürth – will she apologize for Dresden? 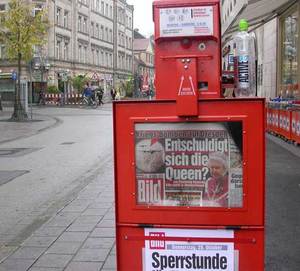 Meanwhile, BILDblog shows how much worse Prince Philip’s black eye looks in Bild than in some other papers.

The website georgewbush.com has been blocked to visitors from outside the US, according to BBC News:

bq. The international exclusion zone around georgewbush.com was spotted by net monitoring firm Netcraft which keeps an eye on traffic patterns across many
different sites. …

bq. Readers of the Boingboing [sic] weblog also found that viewers could get at the site by using alternative forms of the George W Bush domain name.

I spent part of yesterday with a friend who’s in the process of voting by post, having received the papers fairly late, and I imagine she can’t see it either. However, I suspect she already knows how she’s going to vote.

Boing Boing goes into details as to how it’s done (the entry is updated with readers’ comments integrated). I’m always curious about Internet exclusion zones or sites that treat me as a German even when I’m researching something English or international.