To say nothing of this.

In September, I reported on the Landesmedienzentrum Baden-Württemberg and the quality of the English on its website. From the Impressum:

How did this change come about? Well, for one thing, Sabine Lockner-Schadek, a professional translator on the pt mailing list at Yahoo groups, wrote an email to the Landesmedienzentrum pointing out the poor quality. She received a rather unfriendly email reply ans was asked not to bother the Director with this information. The site remained unchanged. Then Sabine wrote to the minister Frau Dr. Schavan, who was in charge of a ministry that provided some funding for the project. She was then informed that after her first approach, the LMZ had engaged an expert translation dcompany to do the corrections. The quality was described as being the result of text passages from drafts being wrongly put online. And the LMZ told the ministry it had informed Sabine of this change, which is apparently not true.

There has recently been a meeting of the European Broadcasting Union in Basle, and the LMZ would have made quite a fool of itself without Sabine Lockner-Schadek’s helpful comments. So let’s thank her here on behalf of the taxpayers of Baden-Württemberg at least.

Some days ago, Isabella Massardo posted some links to articles in Italian about legal translation. I haven’t had time to look at them closely, and as I have only rudimentary Italian I would need a lot of time. So here is one anyway: Paola Apuzzo did not want to do legal translation, but that’s what she finished up doing, and she enjoys it. I must remember to glance into the De Franchis dictionary when I next pass it.

Francesca Oddone writes about training (I think), and on top of this, the University of Genoa is offering, or is about to offer, a master’s degree in legal translation.

The January 2005 edition of the free online Translation Journal has appeared.

I note in particular a translator’s profile of the unforgettable Alexander Feht, and a number of articles in Spanish and one in Italian – it’s a good idea to represent other languages, I think. Also the regular agony aunts, Fire Ant and Worker Bee, and Danilo Nogueira on From Shoebox to SQL (he doesn’t really get to SQL, though).

Many thanks to f/k/a…. for giving me my own haiku.

If any of my neighbours are watching this, I’d like to point out that there was no way David Giacalone could have known this was a sensitive topic, and that I intend to have cleaned them all by 31 December 2005.

It was put to me recently that Ernst August Prinz von Hannover – note there is no comma after ‘August’ – might be translated and abbreviated as Mr. Prinz von Hannover (this was in a context where names are always shortened to title, initial and surname). The reasoning is that since the abolition of titles in Germany, ‘Prinz von Hannover’ has been only a surname.

I don’t think it works in English, where the standard form seems to be Prince Ernst August of Hanover or Hannover (the single N in Hanover is still usual for the dynasty; the double N is more common than it was for the town). One could then leave it to general knowledge that there is no aristocracy in Germany any longer.

One of the Web authorities on titles is Mark Odegard:

bq. In Germany, since the Weimar Republic, all titles are considered part of one’s last name. Thus, a real title holder can “adopt” an adult, and the otherwise unrelated person then can become “Joe Schmuck Duke of Saxony” (this is the case of ZsaZsa’s hubby); the practice is alluded to in Billy Wilder’s film, One Two Three (Cagney’s last film before Ragtime).

bq. Since 1919, according to the German republican government, the nobility no longer exists as a legal entity. Nevertheless, the titles and noble designations of the nobility have not been abolished, as they have in Austria, and may still be carried. Legally they are now merely parts of the family name and in theory convey no status. Following this rule all children of, for example, a Count von Beust, whether male or female, would have the family name Count von Beust. Similarly your could find ladies named Elisabeth Duke of Saxony or Luise Prince of Prussia. A woman married to the Hereditary Grand Duke of Baden would, in law, also be named Hereditary Grand Duke of Baden, as would all their children. To avoid making all this seem too ridiculous the German government ignores much of its own law and allows the wives and children of nobles to take the gender-specific titles appropriate to their sex.

So Caroline can call herself Prinzessin, instead of Prinz.

bq. Another example of society ignoring the 1919 law and following traditional practice is that in all German telephone books a person named, for instance, Baron von Richthofen would be listed under “R” for Richthofen rather than a “v” for “von” or a “B” for “Baron”. The U.S. telephone books are (unwittingly) more compliant with current German legal writ by listing all persons with a “von” under “v”.

The question arose recently on the pt list at Yahoo: how do I address a German ‘aristocrat’ in a letter? The answer is: probably by ignoring the letter of the law.

Meanwhile in Austria it is a much more serious matter to pander to the (formerly) great and good. Under the Habsburgergesetz of April 3rd 1919, it is unlawful to use titles to address people (verboten). See an entry in Michael Kadlicz’s old weblog (new weblog here):

bq. Wilfried Seipel, the Director of the Kunsthistorisches Museum, addressed Otto Habsburg as ‘kaiserliche Hoheit’ (Your Imperial Highness; kurier.at). This is sufficient to start a storm in a teacup in Austria.

But what does verboten mean? Are there any consequences?

Jeremy Phillips’ and Ilanah Simon’s IPKAT intellectual property weblog is very active and up-to-date, and regularly complains about the time it takes to get translations into English of European Court of Justice decisions and Advocate General’s opinions, as again on December 14th:

bq. The Court of First Instance gave judgment yesterday in Case T-8/03 El Corte Inglés v OHIM – Pucci (EMILIO PUCCI). It is available in a number of languages including Latvian, Lithuanian and Slovak — but not English.

I don’t know who reads these rants of those who might do something about it, but here’s some evidence that these translations are really awaited.

bq. The IPKat wonders why the European Commission spends his hard-earned money on a variety of causes all over the world, but won’t provide enough cash for immediate translation of cases involving EU law into the world’s most widely-used language in intellectual property circles. Who, he wants to know, is the person responsible for the translation of ECJ and CFI cases? What is the basis of current translation policy? Does it have any official sanction? How are English-speaking lawyers expected to compete in the provision of legal advice, with lawyers from France, Germany and other countries in the lucrative market for intellectual property services when the others can rely on official texts and translations but English-speakers must make to with unofficial translations? Why is this state of affairs being allowed to continue? How much would it cost to provide timely translation of ECJ and CFI decisions in all main EU languages? What is the Department of Trade and Industry in the UK doing about it? Why is no-one else shouting?

I have read that the translation service costs an EU citizen an average of one cappuccino a year, but whether that includes the ECJ translations I don’t know – perhaps one should add a piece of carrot cake.

The following will not be a surprise to Germans: 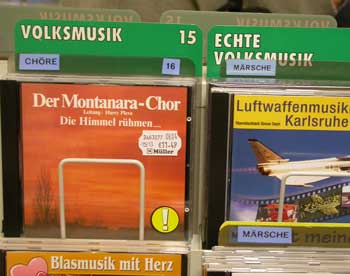 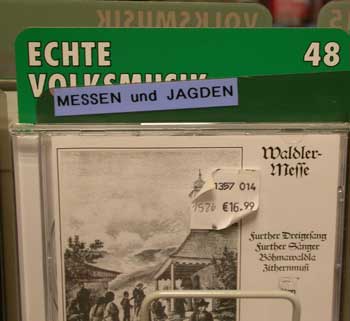 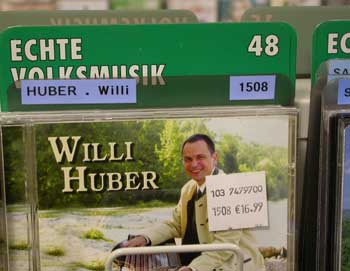 OK, some of the CDs don’t seem to be quite in the right category. But there is definitely a distinction here. (Drogerie Müller, Nürnberg)

Btw, the second CD refers not to Fürth, but to Furth im Wald, famous for the Drachenstich.

Yesterday, the House of Lords held that imprisoning foreign terror suspects without charging them or trying them is against the European Convention on Human Rights. (Independent – Guardian)

Here’s the text of the judgment.

Curiously, not a day after the Home Secretary, David Blunkett, was forced to retire for other reasons, this was a thumbs-down vote on his policies.

It’s a really important decision where nine law lords sit (by the way, they don’t wear robes or wigs, and there was a majority of eight to one. The full name of the court is the Judicial Committee of the House of Lords.

I wanted to see what the German papers did with it, but there is little available. The topic was promptly reported by the wonderful German weblog on human rights, Menschenrechte, which quoted an Austrian source.

From the Independent report:

bq. Lord Hoffmann, one of the panel of nine law lords, said: “[This case] calls into question the very existence of an ancient liberty of which this country has until now been very proud: freedom from arbitrary arrest and detention.”

bq. “That is the true measure of what terrorism may achieve. It is for Parliament to decide whether to give the terrorists such a victory.”

bq. Baroness Hale said that the law was clearly discriminatory: “Substitute ‘black’, ‘disabled’, ‘female’, ‘gay’, … and ask whether it would be justifiable to … lock up that group but not the ‘white’, ‘able-bodied’, ‘male’ or ‘straight’ suspected international terrorists. The answer is clear.” After being told of the ruling, detainee “A”, who is being held in Woodhill Prison, Buckinghamshire, said: “This ruling should send a message to the legislators that ‘national security’ can never take precedence over human rights.”