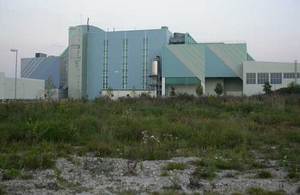 Carbonisation process
The combination of pyrolysis and subsequent combustion is utilised in the carbonisation process. First of all the shredded waste is degassed in a rotating carbonisation drum at 450°C and separated into pyrolysis gas and solid pyrolysis residue. The pyrolysis gas is transferred directly to a further combustion chamber. The remaining pyrolysis residue is cooled and separated into fractions larger and smaller than 5 mm. The fine fraction consists almost exclusively of carbon which is crushed and injected into the combustion chamber with the pyrolysis gas. At temperatures of 1300°C, even the mineral residue melts. It granulates in a water bath and can be used later in the road construction sector. The only German plant of this kind to date is located in Fürth. It was shut down following an accident in summer 1998 and, on account of technical and other problems, will not be starting operation again. According to the company which developed the carbonisation process, these problems do not essentially cast doubt on the technology. However, the Federal Environmental Agency and the manufacturing firm no longer assume that this technology will be implemented in the short term in Germany.

In Germany, an entire neighborhood in the town of Furth had to be evacuated in 1998 when gas leaked from the thermolysis plant. The incident prompted the Siemens Company to shelve its waste treatment business altogether. 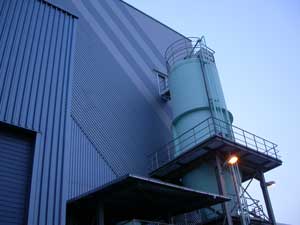 But it makes a wonderful opera house, with first-class acoustics!