I have a link on my blogroll to www.gizmodo.com, but sometimes I go there via Google, and I was annoyed today when (eventually) I noticed that I was reading German text, and the contents were different from the original. I really hate this patronizing matching of British ads and American blogs, in this case, to my perceived interests.

At least it wasn’t a machine translation. Micro Persuasion reported on this a couple of weeks ago:

bq. Nick Denton writes in that VNU and Gawker Media have struck a licensing deal that will take Gizmodo into Europe with an eye towards becoming the ultimate European destination for everything gadget, gizmo, and cutting-edge consumer electronics-related. VNU will provide its local presence and its network of bloggers as well as its knowledge of the local consumer electronic players in Europe.
Gizmodo’s content will be translated from English into 6 additional languages, then augmented with local coverage for each market.

You can check it out in French, German, Dutch, Spanish and Italian.

I wish I’d had this interactive online tour of the church (click at top right) before I translated this. 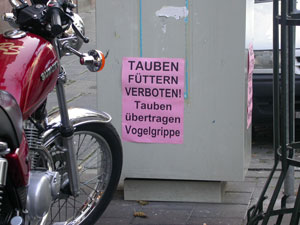 UPDATE 2018: This post is out of date. All links have been removed. Andrew’s weblog German Joys has changed its site.

Andrew Hammel is an American lawyer who teaches legal English at Düsseldorf University. His weblog, German Joys, has been online since December 2004, but when I first saw it it appeared inactive. It seems to have awakened to life since then.

Sascha Kremer reminded me of its existence in his entry ‘Der Lehrstuhl blawgt’. Andrew’s entry on Leitkultur (and followup), or more properly the comments on Claudia Roth’s article in the FAZ linked there, raised my blood pressure usefully.

Btw, there is a Harvard blog written by an American who taught at the Technische Universität München and blogs solely, it appears, in order to blast that seat of learning. Quite bizarre.

Here is something in English:

bq. The English language is very widespread in Switzerland. After their mother tongue, the Swiss speak English best, since it is used as a link and the language of communication in this multilingual country of germanophones (65%), francophones (20%), italophones (7.5%) and Romansh (0.5%). The Swiss English-language skills shown in the following table indicate that two out of three German-speaking Swiss and one out of two French-speaking Swiss speak English.

This was also the topic of the arte programme Zwischensprach last week (note the film company’s name Dschoint Ventschr).

Zurich is experimenting with English as the first foreign language. Among those who opined on this was Professor Richard J. Watts, who has edited a book on the topic, and Remigi Winzap (great name), a Swiss diplomat in Brussels whose first language was Romansh.

Official languages in Switzerland: German, French, Italian and Romansh. But the German is really almost two languages, because the spoken and written language diverge.

Some seemed to believe that the English spoken in Swiss companies where English is the company language was not too good. The logical leap from this to discouraging learning English at school was too big for me. Then again, there was disagreement as to whether French is harder to learn than English. It probably is harder for German speakers IMNSHO. Anyway, people had very strong opinions.

Udo Vetter of law blog has started Knastblog (in German). It’s intended to be a team effort:

Rosalea Barker of The Wires has an interview with a conscientious objector, Joshua Casteel, who was in the army for 8 years and was trained in Arabic for Iraq.

He learnt at the Defense Language Institute at Monterey in California. In Iraq he worked as an interrogator.

bq. Q: Uh-huh. I’m curious how that served you. Do you feel that you were trained to the point that your language skills were an asset and not a hindrance? You know, giving you a false sense that you were understanding something that you didn’t understand?

bq. A: Well, we used translators constantly. Native linguists. Even those of us who went to training. Because we didn’t have the mastery of dialect that was necessary in order to really do the job. It gave us a sense of kind of control, or a sense of security that we could usually understand what they were saying, the more that we were in the country and sort of picking up the idioms. But being able to communicate to them in an efficient way was very difficult. So we always used translators.

This did not work well because of all the cultural nuances that the Americans didn’t understand. What is a native linguist? Someone from Iraq who speaks English, presumably.

The interviewer occasionally seems out of her depth.

bq. The bulk of my interrogation involved local laborers, schoolboys, young fathers, imams, veterans of previous Iraqi wars. We were interrogating what we referred to as Average Ahmed.
Q: Average Ahmed?
A: Like Joe Schmo. And those were the people who allegedly were the face of the insurgency, and these were just everyday normal people.

The topic of assisted suicide has been in the news in Germany, Britain and the USA all at the same time.

The following remarks are intended to introduce material from Britain and the USA to assist the debate.

The Swiss organization Dignitas has set up in Germany. On German TV I heard that the Germans immediately think of euthanasia in this connection, but euthanasia has ‘a bad reputation’ in Germany (it’s a euphemism for the gas chambers). And discussions in the media on assisted suicide seem to concentrate on saying that ‘we must improve palliative medicine’ and ‘doctors must be more prepared to provide morphium to the terminally ill’, but to avoid the main issue.

Since the debate isn’t really getting down to brass tacks, I would like to recommend the transcript of the House of Lords debate.

Lord Joffe, a cross-bench (no party affilitation) peer, was going to introduce a private member’s bill, the Assisted Dying for the Terminally Ill Bill. Following research and the debate, the bill will be revised. Anyone who wants to read the House of Lords doing its best work might be interested in the debate. The Commons will not introduce such a bill because it isn’t of party-political interest.

Hansard transcript: the debate began in the afternoon (3.9 p.m.), there was a break for something else and then it continued to midnight. Navigation at top of page. Table of contents for October 10 2005.

bq. Baroness Jay of Paddington:
The experience of Oregon shows that far more people ask for a lethal prescription than actually use it. For many, it is seen as a comforting insurance policy against unbearable suffering. Most importantly, it gives the patient ultimate personal control over when and how they dieover the end-of-life decision. In our very civilised secular society, I do not believe that we can deny that final right to our citizens.

The House of Lords committee investigated the situation in Switzerland, the Netherlands, Belgium and Oregon. Their report is available on the Internet (introduction, three PDF files). This is a source for evidence on the topic. The first file, for instance, describes the situation in Oregon. In 1994, a law was introduced allowing terminally ill adults to have a prescription in case they needed it. There were numbers of people who never used the prescription but died of natural causes.

The first U.S. Supreme Court case presided over by Chief Justice Roberts, Gonzales v. Oregon, deals with this issue. Here is a transcript of the argument.

Back to the House of Lords:

bq. Lord Joffe:
Much of the passionate opposition to this Bill is based on religious beliefs. I naturally respect the religious beliefs of those who express or share those beliefs, although I should add that public opinion surveys show that a massive majority of both Protestants and Catholics do not share the views of their religious leaders on this issue. The question that arises is whether a relatively small minority of society has the right to impose its beliefs on members of society who do not share them. In contrast, this Bill does not seek to impose anything on anybody. It simply provides another end-of-life option which terminally ill patients can accept or disregard as they choose.

That would be my fear in Germany – that the field is being left open to various pressure groups using emotional arguments.

Numerous entries in Handakte WebLAWg give links on the topic.