Some curious statements from the local rag (most of them yesterday, so probably no longer available online):

In Britain, 29 per cent of the population are Anglicans, 11 per cent Protestants, 11 per cent Catholics and 1.5 m Moslems. 41 per cent have no religion.
(Who did they get this from – a Presbyterian?)

An English woman who has lived in Nuremberg for fourteen years had terrible trouble getting a job when she first came and it was almost impossible to get a residence permit (Aufenthaltsgenehmigung) – Pardon? What happened to the EU?

Green party city councillor Brigitte Wellhöfer on the number of English fans who go around with their shirts off: ‘Die Männer hier sehen doch alle nach Feinripp-Unterhosen aus’. (The men here all look as if they had fine-ribbed underpants.) – I find this hard to understand – does she mean you can see the imprint of their jersey underpants on their skin? Just as well the fans couldn’t hear it.

They also have a map entitled England, where Scotland and England are marked black, whereas Ireland and the Hebrides have been left green. 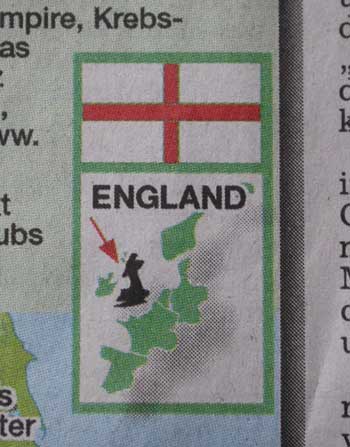 Well, they didn’t get that from a Presbyterian.