No, not judges again, but the Richter scale. Following a small earthquake in Kent, John Wells points out that we usually pronounce Richter wrong:

Saturdays minor earthquake in Kent meant that the newsreaders made several references to the Richter scale. As usual, they mostly pronounced it either [MM: in the German way or in an approximation of it]. But Charles Richter, the creator of the earthquale magnitude scale, was not from a German-speaking country, and the newsreaders otherwise admirable familiarity with German pronunciation is here misapplied. He was an American, born in Ohio. Being American, he naturally pronounced his name [MM: like Rictor, as in Victor] , and we should do the same …

I am not taking the time to reproduce the phonetic alphabet here, nor could I identify a permalink in John Wells’ weblog.

I see that today the Dutch Queen’s Day is being celebrated on the South Bank, so time to mention the presentation at the ITI conference on unclogged English last weekend.

Dr. Joy Burrough-Boenisch has spent many years editing scientific English written by native speakers of Dutch. Her book is Righting English that’s gone Dutch. Unclogged English is the name of her company.

This presentation was ideal for those of us living outside an English-speaking country. It all sounded very familiar: the unattributed alteration of one’s English in a non-grammatical direction before publication (the publishers I translate for don’t do that, but many do); the editors in Britain who have no framework to identify what has gone wrong because they don’t speak the foreign language that is causing interference (it was suggested that translators are the ideal people to train others to correct foreign English); the tendency of national ‘dialects’ of English to develop.

Joy mentioned two organizations that are attempting to train translators and others in mainland Europe in editing and negotiating: SENSE (Society of English-Native-Speaking Editors in the Netherlands) and MET (Mediterranean Editors and Translators).

The idea of this editing is not to turn everything into perfect British or U.S. English: some globalization is necessary.

I was particularly interested in considering tactics as to how to approach authors. It strikes me as easier to make a plan if I recognize that German authors are increasingly going to have my English reviewed by non-native speakers and that this is an international phenomenon, I will be more likely to devise some rules of etiquette and consider how to phrase comments to the author, rather than seguing into a rant about stupid foreigners who think they can write English. (Recent example: I was asked to change ‘in more detail’ into ‘more in detail’).

It will be worth following the activities of these organizations. Links on the sites.

One thing I’d like to know more about is typical differences in sentence structure between German and English. I change sentences around but am not conscious of a technique. Grammatical and vocabulary differences are much more obvious to me.

Is this just the new habit of celebrating St. George’s Day, or is it the BNF? (Similar questions would arise if Germany had a patron saint’s day) 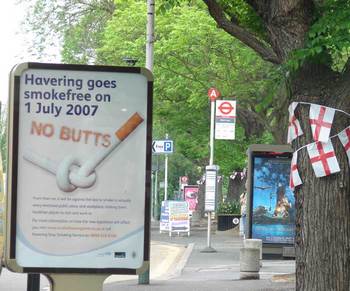 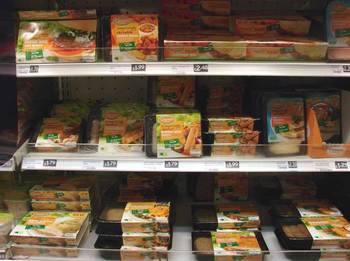 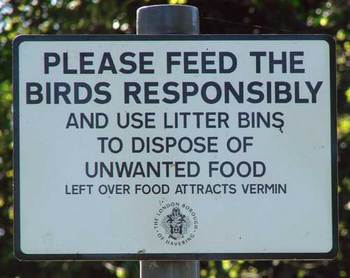 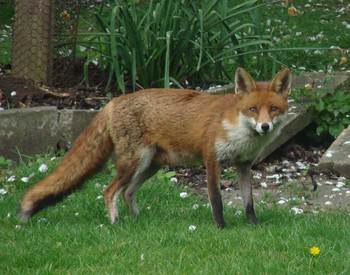 If you get home and find an urgent request to add this to your translation:

you will be as glad as I am for Hall’s dictionary of Subjects & Symbols in Art and in particular Anabel Thomas’s Illustrated Dictionary of Narrative Painting:

Matteo di Giovanni also chose to show one apostle figure only at the side of the Virgin’s tomb. This is Thomas who doubted that the body of the Virgin had indeed been transported to heaven. According to apocryphal sources the Virgin had to let down her girdle so that Thomas would realise that both her soul and fully clothed body had ascended to her maker.

Heading in the Independent: Stressed Britons opt for ‘well-being’ breaks

So that’s the word for the German Wellness, even if the Independent puts it in inverted commas. There are plenty of other uses out there. (‘Britons’ is best headlinese, of course). Actually, they do use the word ‘wellness’ in the article too.

“Once upon a time most holidaymakers were happy to return home with a suntan and a bottle of the local hooch,” he said. “In the future they will be bringing back a greater sense of well-being, a major life-shift, a new look and maybe even some new body parts.”

I’d love some new body parts, but probably not the ones they mean.

Healthy eating, nutrition, exercise, beauty, relaxation and pampering are becoming more important to people and many want to incorporate those elements into holidays, the research found.

I like the separation of ‘healthy eating’ and ‘nutrition’. The trouble with nutrition is that whenever I read that something is good for me, I think I should eat it in addition to the rest of my diet.

Transblawg is about to close comments for a break, whether well- or illbeing. It was difficult choosing between the ITI 20-year conference in London, the DBJV conference in Cambridge, the ADÜ-Nord conference in Hamburg, and Barbara Ohm’s first of seven guided walks on the history of Fürth on Saturday.

Some years ago, searching for weblog + translation usually led to sites dealing with the translation of computer programs in computer languages. Now there are many more human-language translation weblogs and it’s hard to keep up with them.

Masked Translator, for example, is ‘A Web log about the translation industry and the profession of translating, brought to you by translators with a combined 25 years of professional freelance experience’.

This has been around for a couple of months. I particularly like a small collection of Absurd Comments on Literary Translation.

It links to Brave New Words, by Brett Jocelyn Epstein, ‘A blog about translation, language, literature, and other related topics’. This has been around for a year and has some interesting entries.

Slaw – which describes itself as a co-operative weblog about Canadian legal research and IT, etc. – kindly gave me a mention, and in connection with that I found a reference to a book on legal translation that has not yet appeared in North America but may have just appeared in Europe: Translating Law, by Deborah Cao. The table of contents may be seen on that site as a PDF file.

The book investigates legal translation in its many facets as an intellectual pursuit and a profession. It examines legal translation from an interdisciplinary perspective, covering theoretical and practical grounds and linguistic as well as legal issues. It analyses legal translation competence and various types of legal texts including contracts, statutes and multilateral legal instruments, presents a comparative analysis of the Common Law and the Civil Law and examines the case law from Canada, Hong Kong and the European Court of Justice.

One thing that strikes me about academic books on legal translation is that there is a lot of space given to the translation of statutes, which is something I tend to think is a bit outside the usual translation scenario, because it’s got as much to do with drafting as translating. Susan Sarcevic’s book has that emphasis too. It’s probably easier to do research on bilingual legislation too. But I will have to see the book to judge that.

Meanwhile, I had just skimmed an interesting article on Chinese legal translation: Translated Chinese as a legal language in Hong Kong legislationClara Ho-yan Chan, Instituto Politécnico de Macau. It’s largely about the translation of the Sale of Goods Act into Chinese.

It was exciting to read that Mark Liberman of Language Log did not know the word conclusory. I have to admit that it’s used in American law more than English, but I did know the meaning when I encountered it. Entries by Mark here and here, and by Steve at languagehat here.

I did find it adequately defined in Merriam-Webster’s Dictionary of Law and in Black’s Law Dictionary, but not in Gifis.

But it’s a problem in German law that German language dictionaries omit specialized terminology, and apparently to some extent that is true of English dictionaries too. So we must be grateful to Mark for doing all the research on the term and even getting a few lawyers to come out of the woodwork and opine.

At first I thought this was one of those wonderful American terms that are thrown in so fast as objections in examination in chief (direct examination) and cross-examination of witnesses, like ‘asked and answered’ or ‘leading’ or ‘hearsay’, but it would be ‘Objection – calls for a conclusion’.

Note the comments at languagehat, especially on the dubious word ‘facially’, meaning ‘on the face of it’.

On this auspicious or inauspicious (depending on your point of view) occasion, one is bound to ask: what do Benedict XVI and Transblawg have in common, and what not?

We have to conclude that there are only a few similarities. Both were born in Bavaria, but Transblawg is not likely to reach the age of eighty. Both speak German and English. Both invite comments – up to a point.

Transblawg has referred to the Pope more than once, for instance here.

But: Transblawg has not written a life of Jesus Christ
Transblawg is never infallible
Transblawg has not been to Rome (or even Altötting, despite pleas from a sociologist friend – would like to go there with a camera)
Transblawg is not well-dressed, and has certainly not revived archaic forms of dress
Benedict XVI does not carry a camera around with him all the time
Transblawg does not stand at a window and read stuff out to an admiring crowd
Benedict XVI probably doesn’t have a picture of Martin Luther on the wall
And Benedict XVI has a (somewhat) more spiritual style than Transblawg, which often seems drawn to the trivial

But it takes all kinds to make a world, so happy birthday to us.

LATER NOTE, in response to comments: we do, in fact, have a suitable Austritt for holding speeches from, but the audience is missing (except where captive; pictures taken today). 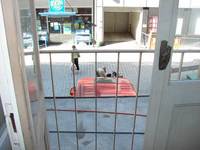 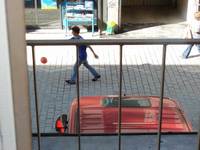 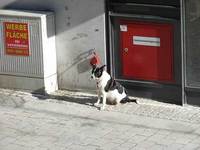 The Guardian reports that Great Yarmouth PC Gary Pettengell, who learnt rudimentary Lithuanian in order to help the local community of Lithuanians, has been voted Lithuanian personality of the year.

It’s a different question how reliable the following translation is – at all events, the English original is probably not used much nowadays:

Let’s be having you
Kliosek minas