I was disappointed when I heard this fountain is to be moved a few hundred metres down the road, ostensibly to show it off better and to make this part of the pedestrian zone more beautiful, but really, I suspect, in order to stop the hoi polloi from sitting around it in the middle of the seating belonging to the Italian restaurant and ice-cream parlour. Still, I had to accept it when I saw the place already prepared for it. I then looked forward to getting a picture of it being transported through the air, rather like the scene in Goodbye Lenin. 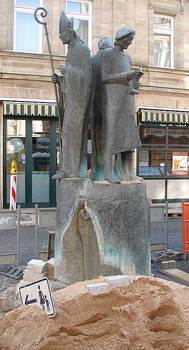 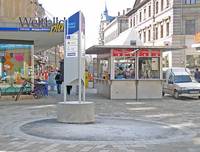 But now the Fürther Nachrichten reports that the fountain will have to stay where it is. No-one wants to move it next to the Bratwurst stand, which apparently was intended to go but which has an option of extending its lease for another ten years.

They’ve already spent 8,000 euros on making the water available at the new site, but now they say it may be used in future for another fountain there.

The figures of the three rulers of Fürth are a bit soppy. but it’s quite a good fountain, not in the class of the Centaurenbrunnen in front of the station, but much superior to the monstrosity on the Grüner Markt.