I have actually got some law and translation topics, but not much time to write them up. So the series of ornithological discoveries continues – this is (I have convinced myself) a young white-fronted goose: it hasn’t got the white front yet, although the pale patch on its cheek is developing. A winter visitor to Germany. I watch out for geese on their own, away from the flock. There is a big group of Canada geese, and another of greylag geese, sometimes joined by two barheaded geese. But when I photographed what I thought was a greylag goose separated from the flock, I found when I looked at the picture that it was a bean goose (Saatgans), with orange feet instead of pink. 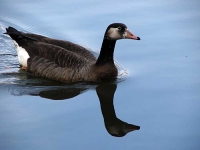 Incidentally, Andreas has some great pictures of geese in the Fürth Stadtpark on his weblog.

LATER NOTE: This is probably a cross between a Canada goose and a greylag goose. See later entry.