I have been remiss in not publishing last Thursday’s shocker: a Portuguese concern looks likely to replace part of the centre of Fürth with a huge glassed-in shopping centre.

Photos in next entry.

Links to the local rag and a heated discussion in German at zonebattler’s blog.

It looks as if the town council will consent to the project on July 30th. It has been hushed up until now.

The prospective investor, Sonae Sierra, is also responsible for the rather unattractive Alexa Center in Berlin.

One negative aspect might be the intention to use the first railway as a theme. This could be quite trivial. Some of the underground stations already have tiled versions of the train, which seems enough to me.

A positive aspect would be the resurrection of the first-floor banqueting hall in the Park Hotel – the hotel itself would go – which no-one ever sees. The hotel has been altered several times and is not listed, but I imagine the hall should be. It would be used for restaurants and cafés, well, better than not seeing it at all.

In the Stadtheimatpfleger’s latest PDF newsletter there is a photo of the hall in 1913 which I can’t find anywhere else (click on Rundbriefe). I have pinched it: 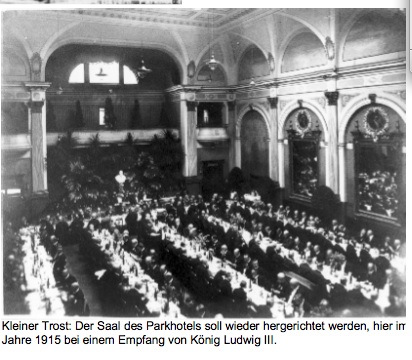 I think that this would be more than a small comfort (kleiner Trost). I am very keen to see it.

What disturbs me most about the whole thing is the virtual loss of Rudolf-Breitscheidt-Straße as a public street. At the moment the City Center – a previous and now failed similar project – is closed after 18:00 and, of course, on Sundays. The new place would presumably stay open till 20:00. Obviously the fact that this street is the natural pathway from Schwabacher Straße to Fürther Freiheit is part of the attraction – people, potential shoppers, will walk through there. But when it’s closed, the centre is going to be deader than ever (especially since so many comfortable seats have been removed so no-one can sit down comfortably on warm evenings).

This certainly explains why they’ve been slow to pave Rudolf-Breitscheidt-Straße as a pedestrian street.