Some projects have an air of doom from the outset. But I could be wrong.

Somehow I feel that Franconian cuisine is both more and less than this. 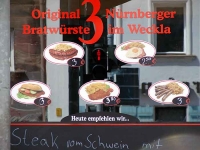 Attempted interpretation of the above, L to R, top row first:

Can it really be a Currywurst? Fried egg on Leberkäse (which contains neither liver nor cheese), possibly mashed potatoes
Schnitzel in a roll, Schnitzel with chips, six Nuremberg sausages with sauerkraut (Sechs mit Kraut)

2 Wiener with a roll, Currywurst? with a roll, Leberkäse with a roll
3 Nuremberg sausages in a roll (Drei im Weckla), chips (French fries)?

Where is the Schäufele? Carp? Saure Zipfel?

Opposite the Jewish Museum, by the way.