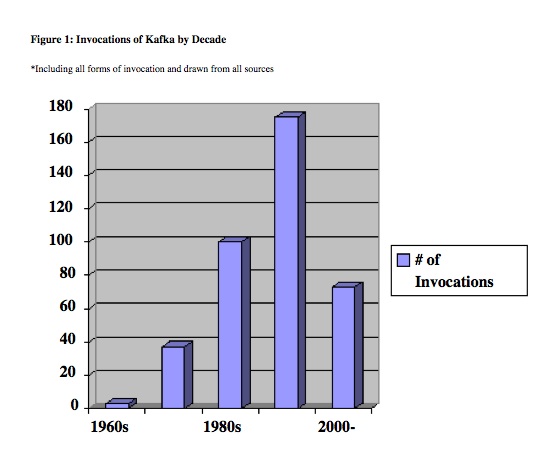 From Brian Pinaire: Invocations of Kafka in American Law: An Empirical Examination

In this paper, Brian Pinaire looks at American courts’ citations of Kafkaesque, or sometimes Kafka, Kafkan or Kafkian, especially prevalent in California, New York and Ohio. He classifies the references into invocations of authority, absurdity or predicament.

Some examples of the last category concern those without (adequate) language assistance.

…the case of Mtumbo Balinka. Kafka could not have written it better.
A Sudanese immigrant arrested on misdemeanor charges, Balinka was first sent to
Riker’s Island. Fearing deportation and rape, he lost control and wept uncontrollably—a
not irrational response, for which he was sent to a mental hospital. There he stayed for a
longer period of time than he would have had he simply been found guilty of the
misdemeanor charges. In part, this was due to the fact that he had the double misfortune
of barely speaking English, and then being examined in prison by the state’s
psychiatrist—a Korean immigrant who spoke the language even less well. Dr. Wong
noted in the patient chart that Balinka “has delusions of arriving at the hospital by train.”
In fact, what he’d said was, “Doc, I was railroaded here.” Woychuk notes dryly: “What
we had here was a failure to communicate” [emphasis added].

While I’m on this topic, let me return to something I’ve mentioned before. The Internet is full of references to a quotation allegedly by Kafka, for instance here:

“A lawyer is a person who writes a 10,000-word document and calls it a ‘brief.’” So said legendary author Franz Kafka, who happened to be an attorney himself.

This seems fishy to me. Can anyone pin down the original?

(Thanks to Brian Pinaire for permission to quote)