Fürther Nachrichten, and possibly the German translation of Dickens – this comment on the financial crisis puzzled me in the daily paper:

No, Projekt Gutenberg has a better translation – presumably done before 1971 – the foreword is dated March 1909:

an old discussion on wer-weiss-was about the British and mixer taps (actually in this case a former Commonwealth country).

but if having a good wash, then you put the stop in the sink and put hot and cold into the basin until temperature is ok for you

The Germans may not have thought of that one.

It’s one of those topics that heats national prejudices.

I ask myself: how long have the Germans had mixer taps? Were they introduced together with the autobahn?
I remember how impressed my brothers were when I was living in a ramshackle building in Germany with other students, and the fuse went. The fuse was a large round plug half the size of a rolling pin, and all you had to do was unplug some electrical device and push the fuse back in. They had been expecting work with a screwdriver. But I think that fuse system had existed since the early 1900s at least.

This follows a mailing-list discussion on u-forum about a use of the word spigot in British English and how to translate it into German.

In an article headed Cops Talk Funny, Val Van Brocklin points out some of the curious turns of phrase used by U.S. police in court. British police do this too, though not always using the same terms.

She actually seems to believe that police could be trained not to speak like this.

Geoffrey Pullum was relieved that alle bagage is gelost does not mean all luggage has been lost.

Meanwhile, Sally, at No Hard Chords, finds that there are advantages to hearing The Three Bells in the original French – especially if you don’t understand the language:

Listening to a song in an unfamiliar language can be freeing. For me, bad lyrics can render an otherwise great song unlistenable. But as long as the singer, the production and the melody work, foreign-language lyrics can be clunky or insipid or cliched with me none the wiser. If an English-language version of the song is recorded with bad lyrics, though, a puzzle emerges: were the lyrics this poor in the original or did the poetry get lost in translation?

(Here are the Browns).

The European Court of Justice has held that no matter how long an employee is on sick leave, the employee is entitled to holiday time, reports the Solicitors Journal:

The Dusseldorf employment tribunal and the House of Lords had both referred cases to the European Court for a preliminary ruling on the working time regulations.

Giving judgment in Schultz-Hoff v Deutshche Rentenversicherung Bund (C-350/06) and Stringer and others v HMRC (C-520/06) the Grand Chamber of the ECJ ruled that sick workers continue to accrue to holiday even if they are away from work for the entire year.

What about the translation Arbeitsgericht: labour court, recommended by the German Foreign Office?

Labour is recommended in order to cover both individual and collective employment law. But employment court would be OK for me too. I would avoid using the term tribunal when translating a Gericht, because it suggests something less than a court. Still, this is a comprehensive translation of the court of first instance.

But apparently this was the next instance:

REFERENCES for a preliminary ruling under Article 234 EC from the Landesarbeitsgericht Düsseldorf (Germany) (C-350/06) and the House of Lords (United Kingdom) (C‑520/06), made by decisions of 2 August and 13 December 2006, received at the Court on 21 August and 20 December 2006 respectively, in the proceedings…

Well, I suppose at least it doesn’t matter much to the case in hand, as far as the House of Lords is concerned. 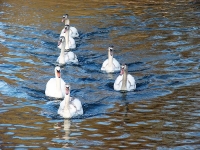 I haven’t seen any of these people in Nuremberg yet. I am particularly worried about the ones with paper-white faces.

But be careful: the third edition is to appear in February 2009.