I’ve already mentioned the mayor’s secret plans to replace part of the centre of Fürth by a huge new shopping centre. Now a protest group has formed, in favour of a better plan: Bürgerinitiative.

Here are some of them disseminating information in Rudolf-Breitscheid-Straße last Saturday: 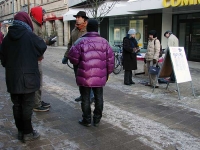 On Thursday January 15, i.e. tomorrow, there is to be a talk by an architect, co-editor of a book on the effect of shopping centres on city centres, Dr. Holger Pump-Uhlmann, preceded by something about the history of the Rudolf-Breitscheid-Straße, formerly Weinstraße, with pictures, by Lothar Berthold, who publishes books on the history of Fürth.

The latest newsletter from the Stadtheimatpfleger, Dr. Alexander Mayer, summarizes the plans and contains a lot of photos with clear indications of which buildings would be demolished if the project Neue Mitte went ahead as planned (and the potential investor is apparently not prepared to give way on the main points). It’s Rundbrief no. 47.