I have at last succeeded in photographing Quaks. I phoned the Bavarian Bird Association pelican ‘hotline’ and they suggested I parked in the centre of Frauenaurach and walked down the Brauhofgasse, since the pelican has been spending the night on the Schwarzer Adler: 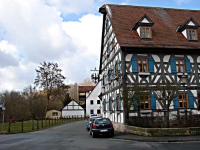 I saw two pairs of storks on chimneys. They were quite noisy: 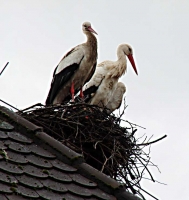 I didn’t think I was going to see the pelican, but he was standing there next to a pond, beside a small pollarded (and dead) willow, unfortunately behind barbed wire and small branches: 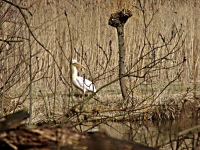 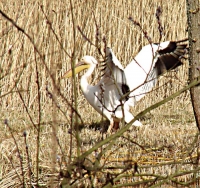 Google Maps shows Frauenaurach. The pond can be seen near Brauhofgasse and the River Aurach.

After that he flew away. Later, I saw him flying over the bridge over the Regnitz. 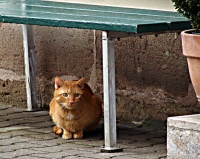 Now my pelican pictures have joined the rest on the website of the Landesverband für Vogelschutz in Bayern.