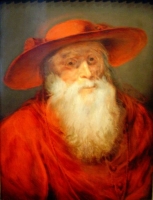 Today is St. Jerome’s Day, which has now apparently become International Translator’s Day, and I am celebrating by translating.

Here are a couple of links, though.

1. Ghaddafi About the story of Ghaddafi’s interpreter collapsing: Richard Schneider has a full account, in German, which suggests that the New York Post was inaccurate when it said the interpreter collapsed after 75 minutes and shouted ‘I can’t take it any more’ – it seems he managed 90 minutes, and the UN interpreter only had to take over the last 5 minutes. The speech was intended to be about 15 minutes long. But simultaneous interpreters usually do about 20 minutes, as far as I know. Ghaddafi said he had brought his own interpreter, because he was going to speak an obscure dialect, but in fact he did not speak dialect. The chairmanship/presidency is currently held by Libya, by rotation, and that is why there was no complaint about the procedural irregularity. (How did Ghaddafi’s French interpreter manage?)

Richard Schneider gibes YouTube links to all sections of the speech. Here is the last one, including the takeover of the interpreting by the UN. These videos may not be accessible online for very long.

2. Becoming a medical translator On her blog, Sarah Dillon has an interview with Andrew Bell, who does medical and pharmaceutical translations and also runs the site Watercooler.

Last week, the Executive Office of the President and National Economic Council issued its “Strategy for American Innovation.” Among the recommendations was a call for “automatic, highly accurate and real-time translation between the major languages of the world — greatly lowering the barriers to international commerce and collaboration.” In other words, machine translation (MT) has captured somebody’s attention in the President’s inner circle.

This tactic would certainly save all the problems associated with human translators – a potential such was recently held for hours, apparently for having Arabic flashcards in his backpack. (TSA defends itself).