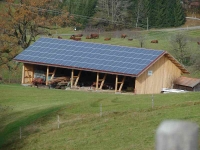 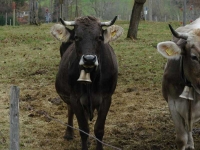 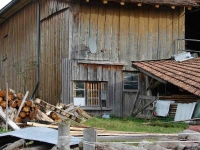 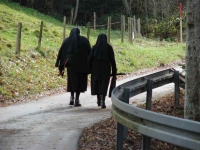 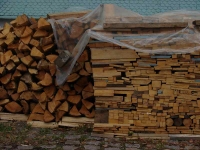 Sascha Stocker Legal English Dictionary – you might have seen this mentioned in a comment to an earlier entry. Sascha Stocker is a Swiss lawyer who has just started putting a DE-EN-DE dictionary of Swiss legal language online. I haven’t had much time to look at it so can’t say much (I am being subjected to various therapies in Teletubby country near Lake Constance). Contributions are possible and will be vetted by the author. Today there are 545 terms in the dictionary, but it is growing, and there’s a forum there too.

It would be great to have such a dictionary, although a German-Swiss one would do just as well. I use a variety of books – see earlier entry on Swiss German dictionaries.

I am just looking at the very beginning: Absicht and Vorsatz both translated as intention. That is quite correct. However, there are times in criminal law where a distinction has to be made. Vorsatz and intention are very wide terms, whereas Absicht is like the English specific intention. That’s why legal German (not just Swiss) has two terms – because they have two meanings. You might be convicted of murder under English law although your intention (mens rea) was developed only a second before the act, in a fight. But if you planned a murder, it would be a case of specific intention / intent.

Henry Porter in the Observer, under the heading I love Europe, but I despair of the EU – yet another journalist gets it wrong.

When the European Court of Human Rights announces a ban on crucifixes in Italian schools, you can either celebrate the liberal march of secularism or deplore the illiberal attack on religious expression and national tradition. 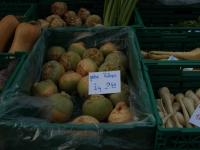 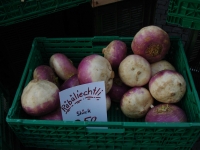 The first one is clear – yellow turnips or beets (Rüben).

The second one means ‘turnip lights’, because they aren’t eaten, but hollowed out by children as lanterns.

Or so I was told in St. Gallen. I also saw a copy of something I think I’ve seen in a book before – a very early diagram of an ideal monastery, the St. Galler Klosterplan (website in German and English).

Things are likely to be quiet here for three or four weeks, although I gather UMTS does reach the Allgäu.

See my later note on the earlier Ravens entry.

At first glance the Rooney’s choice of the name Kai might seem to be another footballing exoticism. In Japanese it means “big water” and in Hawaiian “the ocean”. In Maori it means “to eat” which could draw some predictable ribbing given his father’s famously sturdy build.

In fact Kai is an increasingly popular name for children of both sexes: it came 68th in the Office for National Statistics top 100 names for 2008.

The Daily Mirror is even more confused.

* It’s possible, although not likely, that Wayne and Colleen named their firstborn after Natasha Kai, a female US footballer who plays for Sky Blue FC as well as the USA national soccer team.
…
* Kai is a kind of throat singing practiced in the Altai Republic, Russia.

Can it have been that common German name? Still, who’s to guess where it came from and how they’ll pronounce it. 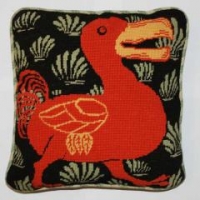 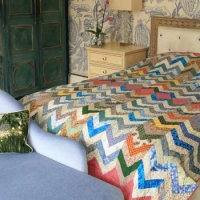 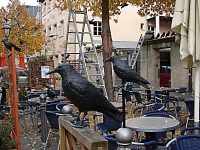 This is Gustavstraße, the oldest part of Fürth, where the buildings are all different heights. Fortunately this project, to hang up one thousand plastic ‘ravens’ to frighten the pigeons away, is apparently only going to be around for three weeks, I was relieved to hear.

There have been peregrine falcons in Fürth, but I don’t know if they’re there this year. Another possibility is dummy egg nesting, but that would have to be done by the city.

LATER NOTE: I picked up two of these for a friend. They are very well made, with a sort of post diagonally through them, so they can be suspended from a hook at various heights or stand on their feet. I later discovered the same ravens, including the flying ones, are available cheaper from amazon.de, albeit not painted yellow. I suppose it is a work of art if you make over three euros on each one (less postage) just for putting your signature on it. I know artists’ signatures are worth a lot.