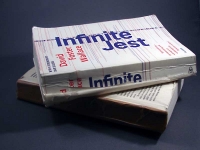 I’ve now finished this novel. I took some advice from the internet to split it in two and also split the footnotes in two, although my copy did not have as many pages as the hardback, but the pages were more closely printed. The only reason I went on reading till the end was because some of the reviews said that people who have read the whole thing then want to start reading it again. I can reveal that the only reason for this is that the plot is left completely in the air, so maybe people want to read again to see if they can find any clues.

Clues to potential later events, including spoilers, at Notes and Speculations. Many other links too here.

This book appeared in a German translation earlier this year. The translation was clearly very good. At the time, there was also high praise for the novel – see Iris Radisch here (German).

I have severe doubts about that.