Yes, it’s not exactly front-page news, because it happened in the year 2000, when police stopped the then Bishop of Stepney, John Sentamu, now Archbishop of York. 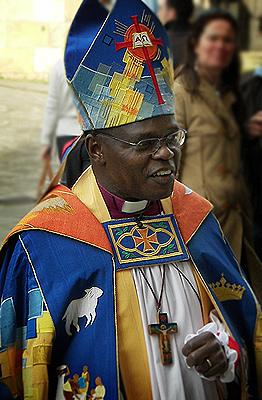 (Picture by Brokethebank from Wikipedia)

The Guardian reported that a police officer stopped and searched Sentamu’s car near St. Paul’s Cathedral, and he was made to get out and stand in the rain. The officer ordered him to open the boot. At the time, he was wearing a scarf and anorak.

“He asked me what I did, and I said ‘I’m the Bishop of Stepney’. He said ‘whoops’. I revealed my dog collar and he looked as if he’d just seen a ghost.”

Despite repeated requests, the officer would not justify his search to the bishop and had kept saying “off you go”.

Of course, he did not drive through a red light and had not been drinking, unlike Margot Käßmann (Spiegel Online in English).

I understand that her resignation is a loss to the church and so on, but I am finding the sycophantic TV news reports rather wearing. In fact, they seem to be interviewing people on the streets of Hannover in order possibly to get other opinions, without the newsreaders sullying themselves by saying anything negative. Does anyone know where she was celebrating and who persuaded her to have another glass?