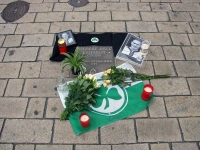 Herbert Erhard(t) was a Fürth footballer who died on July 3 three days before his eightieth birthday. The plaque in the pedestrian zone (photographed this morning) shows that he was in the German team that won the World Cup in 1954, although he didn’t actually play in that game. The green flag is for the local team, Spielvereinigung Greuther Fürth. (There’s a Kissinger plaque outside my house – I wonder what they’ll do for him?)

Fürther Nachrichten seems to have confused the spelling of his name with Ludwig Erhard. Oh, and Ehrhardt was a sports teacher at the local Pfisterschule, which is also going down the tubes, till 1993.

LATER NOTE: Apparently the Erhard spelling is correct – it is the plaque that is wrong.