I booked a train ticket on Tuesday. I was not properly informed before I did so. This is a warning not to try booking a train ticket without assistance from someone who knows what they’re doing.

This is the screen with which Deutsche Bahn ticket machines greet the would-be passenger. The woman looks a bit odd, which may indicate the age of the software. I wanted a return ticket from Fürth to Regensburg, which I understood would cost about 40 euro. Online, I picked out a few trains. They were Regional-Express trains, so it wouldn’t be possible to book a seat.

I started by pressing the screen (haven’t got a BahnCard). Here is the next screen: 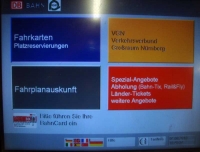 I decided to go for Fahrkarten (tickets), but the result of this was that I finished up with a timetable offering me a return time of nearly 2 hours with a train called ALX. No chance of buying a ticket.

I then went into the booking office. There were no queues. The two staff said they were not permitted to sell me a ticket. They told me that ALX means Alex, a private railway that goes through Schwabach and is no use to me at all. But that wasn’t the problem: I wanted to know how to get a ticket. Then they said I should get a Bayern Ticket, which would only cost me 22 euros.

Back at the machine, where do I find Bayern Ticket?

Back to the office: I have to press Länder-Tickets (bottom right on the screen above).

I spent a long time looking at this, but eventually I saw Länder-Tickets again, left column, 2nd from top. 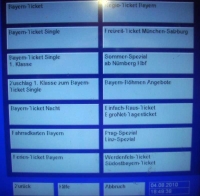 At last, there is the Bayern-Ticket – top left. (Note the sneaky Bayern-Ticket Single below it). Heaven knows what all the rest are. You need an education to know which to choose.

And here is my Bayern-Ticket at last: 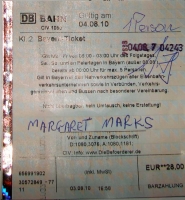 You may note it was 28 euros rather than 22. On the train, the conductor asked me who was travelling with me. That was when I realized that in Deutsche Bahn German, Single means one person, not one way. Why they don’t write Gruppen on the 28 euro one I have no idea. I think the idea in Bavaria is that we still need people, not machines.

I should probably add that I was told recently how easy it is to book a train from London to Cologne (4 hours) or Düsseldorf (thanks Chris). I’ve lost the link, but it may have started here.

Here it is (see comments): best website for London-Cologne by train.

Incidentally, I took the photos on my way home at night, when no-one else was using the machine.