The Bavarian transport minister, Peter Ramsauer, has long since banned a lot of English words from the German language in his ministry. Here’s an interview in German, which appeared in Stern in February 2010.

This story was widely reported once again yesterday, in the UK press as well as the German. The Independent reports today (‘Denglish’ now verboten):

His aim, which was backed by Chancellor Angela Merkel, was to defend his language against the spread of “Denglish” – the corruption of German with words such as “handy” for mobile phone and other expressions including “babysitten” and “downloaden”. As a result, words such as “laptop”, “ticket” and “meeting” are verboten in Mr Ramsauer’s ministry. Instead, staff must use their German equivalents: “Klapprechner”, “Fahrschein” and “Besprechung” as well as many other common English words that the minister has translated back into German.

He may have been diverting attention from the effects of snow on German rail and road transport:

Mr Ramsauer took time off from his role as minister in charge of sorting out some of the worst winter traffic chaos in decades yesterday to announce that his campaign to save German had been a roaring success. He said many Germans felt excluded by the growing use of “Denglish”.

Here is part of a list of Ramsauer corrections from the Rhein-Zeitung.

One can see some of these are difficult. The equivalent to corporate design just doesn’t have the conciseness to make it popular. Then there are words like Handy (not on the list) that seem to be German inventions. One term new to me is Gigaliner (for a juggernaut). I can’t find many ghits on UK sites. Here it says the term was invented by a company for the 2004 International Motor Show:

Taking the underground to Nuremberg airport (I had to rebook to England three times), I was surprised to hear the voice saying ‘Next train to Airport’ – that is, the tube station Flughafen is translated into English. At the station itself, both versions appear on the wall.

Now here is the Hamburg Railway system with all the station names in English:

I remember when I studied German in London that we translated some of the London underground names into German. A fuller version is available at Vienna University:

Heathrow comes out as Heidenreihe, Hounslow as Hundslangsam and Ealing Common as Gemeinsames Aalen.

On the Omniglot blog, today’s problem is how to translate:

It means: Being in the right and getting justice are two different things.

It isn’t very easy to translate it elegantly. Lukas seems to be doing best so far (5 entries at time of posting).

I am thinking of The Makioka Sisters by Junichiro Tanizaki. I can’t swear it was recommended to me, but I remember a friend who lived in Japan mentioning it. I have read it at least twice and could imagine reading it again. I might not have found it if it hadn’t been mentioned.

I am now in the UK, after Lufthansa eventually booked me onto Air Berlin. A young woman architect disappeared in Bristol on December 17th and it sounds as if her body has now been found. She had been out with colleagues, then bought a pizza at Tesco on the way home, but no trace of the pizza was found and her keys and purse were inside her flat, her boyfriend found when he arrived back from a weekend visiting his family.

In Wortfeld, Alexander Svensson compares the website of the Avon and Somerset Constabulary with that of the Lower Saxony police.

There’s a URL for this search, redirecting to the police site, with a map, a video showing her parents appealing for information, tweets, reports and photos, and also social bookmarking buttons.

I’ve been racking my brains but can’t think of an example. In any case, from love to hate seems a bit too big a step. I can think of books that have lost their appeal. I once thought James Fenton‘s poems, such as The Memory of War, poems about Germany and Vietnam, very impressive, but the magic seems to have gone.

Local press in Nuremberg station bookshop. Many of these have mainly the same content. 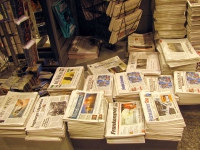 An advert by the German lawyers’ society in Nuremberg Station:

Fürth Christmas tree This morning with real snow on it for once. To the left, the refurbished building that was the earliest department store in Bavaria. By the tree, the peculiar sculpture that has five sides, each showing the shape of a window in the street it faces, or at least that was the idea, but it was installed wrongly. 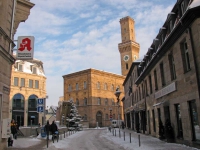 This is rubbish – haven’t I already done this? Anything by Thomas Bernhard or Kazuo Ishiguro, perhaps (not sure if I have any one favourite author, though).

When I was browsing the legal weblog Law and the Multiverse – Superheroes, supervillains, and the law recently, I was thinking about the presumption of death, usually after seven years (see entry I’m not dead yet).

I discovered that the German statute governing this is the Verschollenheitsgesetz, passed in July 1939. Whether this was because of the approaching Second World War, I don’t know.

The Straight Dope has an entry on the legal problems when someone declared dead comes back.

The law calls people who disappear “absent” or “missing.” Professor Jeanne Carriere prefers a more dramatic term: “the living dead.” In her article, “The Rights of the Living Dead: Absent Persons in Civil Law,” published in the Louisiana Law Review, she says

The number of these “living dead” in the United States has been estimated at between 60,000 and 100,000. They create a morass of legal problems. Questions may arise concerning the security of transactions with the missing person’s estate, such as the disposition of his land, the right to proceeds of insurance policies on his life and pensions, the right to a cause of action, the necessity of providing for his dependents, the marital status of his spouse, the paternity and legitimacy of children of his spouse’s second marriage, the conservation of his property from possible waste, the devolution of succession rights that would pass to him, the release of property from a life tenancy, the requirement of his consent to certain transactions, the merchantability of land titles from his estate, and claims of inheritance from him.

Unfortunately, the article by Professor Jeanne Carriere isn’t available online for less than $29.

One famous case (1985) is that of John Burney, who escaped from financial problems and was declared dead, but then turned up again. His wife (he had a new ‘wife’ too) didn’t have to repay the insurance money, but he did.

Steve Fossett was declared dead after less than a year. Seven years is the usual period.

Amelia Earhart was declared dead eighteen months after her plane was lost over the Pacific. And lo and behold, an article in the Guardian yesterday, Finger may point to solution in Amelia Earhart disappearance riddle.

Some bones of a woman have been found on an atoll and the DNA is to be tested.

But now an array of artefacts from the 1930s and bones found on the uninhabited Pacific atoll of Nikumaroro suggest that Earhart and her navigator, Fred Noonan, endured lingering deaths as castaways on a desert island and were eventually eaten by crabs.

There are items supporting the story:

… the other discoveries lend credence to the theory that Earhart died on the atoll after going missing en route to Howland Island in July 1937 at the age of 41 – she was declared legally dead 18 months later.

They include part of a mirror from a woman’s compact, a zip from a Pennsylvania factory and travel-sized bottles made in New Jersey as well as a pocket knife listed on her aircraft’s inventory, all manufactured in the 1930s.

Alongside the goods are the remains of small fires with bird and fish bones, and empty oyster shells laid out in a row as if to collect water, suggesting someone was trying to survive on the island.

Boing Boing shows some artists’ drawings of Julian Assange today and comments on how odd they are.

Another commenter beat me to it: British courtroom artists are not allowed to draw when they are in the courtroom – they have to do it by memory afterwards. The commenter links to Courtroom Sketches on Wikipedia.

Courtroom artists in Germany are allowed to sketch in court, I believe.