This was for people who can’t or don’t want to walk very far. However, as the ground was very uneven and moss hid roots and branches, it was quite wearing.

The department for mushrooms and herbs of the Naturhistorische Gesellschaft Nürnberg developed from Germany’s first mushroom association, founded in 1910.

Not only Herr and Frau Hirschmann, but also several other mushroom experts were there. I have not yet worked out how to collect mushrooms without poisoning oneself unless there is a mushroom expert at hand. I have now consumed two Apfeltäublinge and two Maronenröhrlinge (Xerocomus badius, Bay bolete).

Here is one person’s collection halfway through: 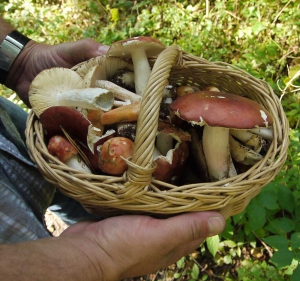 Here is a collection of mushrooms including poisonous ones, for display in Nuremberg on Monday (I was sorry not to find a Krause Glucke or Fette Henne, Sparassis crispa, cauliflower fungus, myself – one of the few I recognized): 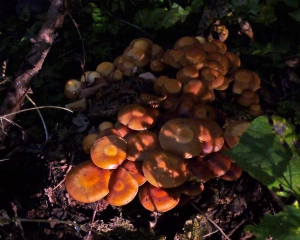 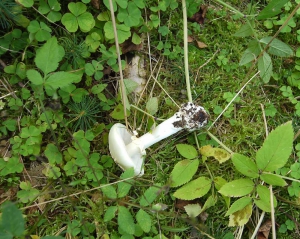 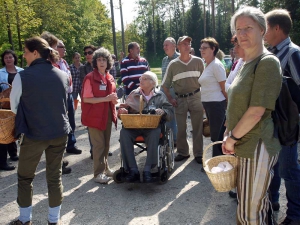 The most dangerous poisonous mushroom (do we not use the word toadstool any longer?) may be the Spitzgebuckelter Schleierling or Spitzgebuckelter Raukopf, Cortinarius rubellus, deadly webcap. It destroys the kidneys but its effect may not be evident for a week or two, by which time you would forget you had eaten it. There is a newspaper report in the Daily Mail about the writer Nicholas Evans, author of The Horse Whisperer, who collected a lot of these on a friend’s estate in Scotland, thinking they were ceps (Steinpilze). But they look completely different. This was in 2008, and when the report appeared in 2010 he and a friend were still on dialysis and waiting for kidney transplants.

Fortunately I have a list of mushroom experts who I can phone up and get to inspect anything I collect.