This is a film I would not normally have gone to see, because the story sounds too predictable and sentimental: a disillusioned 60-year-old Franconian taxi driver helps a little Turkish girl whose grandmother is in hospital and comes to realize the important things in life. I went to see it because, although it’s described as being set in Nuremberg, it shows a lot more of Fürth (the unmentionable). Gostenhof in Nuremberg turns out to be Mathildenstraße in Fürth etc. Another negative point for the film is that it was praised in the TV news (ARD?) – every few months they treat us to a film recommendation, largely films that are sentimental and German. If they recommended a film once a week it might be better, but the rarity of the reviews makes you wonder what is behind it. For instance, they would never recommend something like Achternbusch’s Das Gespenst (The Ghost – English description here), in which an emaciated sculpture of Christ on the cross, in a loincloth, suddenly steps down from the wall and journeys through Bavaria.

My conclusion after seeing it: the film really is sentimental and predictable, but it is very well acted. Elmar Wepper was in Kirschblüten Hanami (Cherry Blossoms – click right through to the full text for a great computer-translated version) in 2008, which I didn’t see, playing a character whose wife plans to go to see the cherry blossoms in Japan but then dies, so he goes on his own. Probably some of the character was similar. Far too many shots of the towers of Nuremberg city wall, but maybe they got some funding from Nuremberg to make it look good, hopefully internationally. 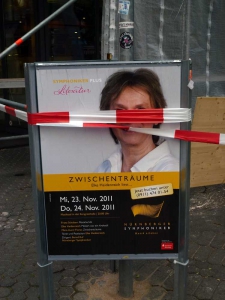 In Nuremberg – one way to get Elke Heidenreich to stop talking. 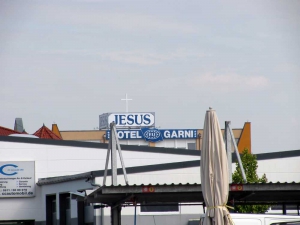 This Hotel Europa shows a picture on its website with the top of the roof cut off. I feel some people who book online may get a surprise when they see it.

I would have been interested to hear some of the speakers. I see one of them was a Netherlands lawyer-translator called Antoinette Dop, who I once exchanged business cards with in Hammick’s in London.

One of the links leads to a PDF – scroll down here to Ingemar Strandvik – about multilingual drafting in the EU. The PDF must be by Ingemar Strandvik, although it has no name on it, and it refers to a ‘study’, which I presume means the conference paper. One thing that I wonder about the EU is how far the translators are responsible for the legislation – I had always assumed that it was the product of legislators, not necessarily linguists or even lawyers – and I presume that is true of the first drafts, but these are followed by translation into the remaining of the 23 languages.

This is not a co-drafting process in 23 languages as such but a system based on three alternating stages: drafting in the source language, translation into all of the official languages and legal revision of the different language versions with a view to ensuring that each one has equivalent legal value. Translations thus become authentic documents and translators’ responsibility is equal to that of the authors of the source texts.

It would be interesting to hear some details of how the system works in practice – maybe the proceedings of the conference will be published some day.

3. law blog reports on a decision of the Federal Court of Justice (Bundesgerichtshof) which held that a landlord’s clause requiring the tenant to paint the upper walls and ceilings white (weißen) was ineffective if it was part of general terms of business and restricted the tenant from choosing his own paint colours while living there. Some nice comments:

I believe in supporting football teams, but when the local one is at the top of the second Bundesliga, I have the impression more people crawl out of the woodwork: 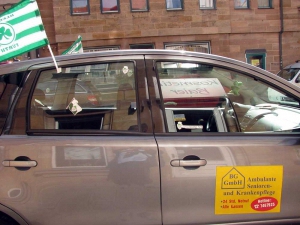 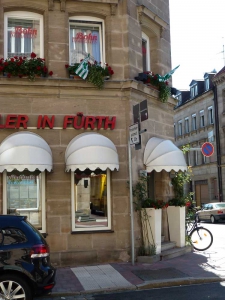 The team in the festival procession: 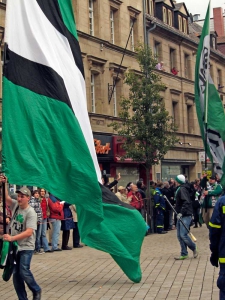 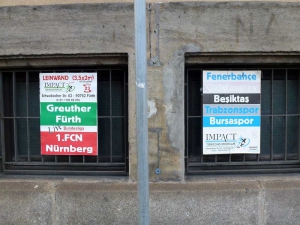 From the Oxford Dictionary for Writers and Editors:

Qaddafi, Muammar /Muhammed al-) (b. 1942) Libyan leader – use Qaddāfī in specialist texts; not Gadafi, Gadhdhafi, Qadafy, Gaddafi (although preferred by The Times), Gadaffi

See also As a Linguist … on Wait, who just died?

It’s been all over the news: the death of controversial, feared, despised, admired Libyan leader Mum…Muam…Moamm…

Crap. Just how the heck to you spell that guy’s name? According to one article I read many moons ago, there have been a recorded 112 different ways his name has been spelled. And that’s apparently not the only strange thing about him.

See also words to good effect on What’s in a name: spelling “Gaddafi”.

I’ve been “translating” his name (from the Italian version, Gheddafi) just about every day since the Libyan uprising began (I work with another translator on the English version of the Italian Foreign Ministry’s website). So when the rebellion broke out we had to decide quickly on which version to use.

We opted to follow the European Commission’s lead, Italy being a European Union country, and use Gaddafi.

Well, fair enough – but if we all followed EU recommendations, we would have to write ‘-ise’ instead of ‘-ize’. (EU English Style Guide, pdf, 7th ed. June 2011)

The Straight Dope has gone into the topic in great depth too. In reply to an apparently genuine comment from the Library of Congress:

The Neue Züricher Zeitung also considers the problem, which is just as great in German.

May be helpful, for instance, in seeing the sequence of oxcarts (two again) in the harvest festival procession next Sunday.

In an earlier entry I mentioned the heavily biased reporting of a Bolivian immigrant to the UK who was said to have been allowed to stay to look after his cat – whereas the acquisition of the cat was just one of several points suggesting that he and his girlfriend planned a long-term relationship.

It seems that Theresa May, the UK home secretary, also believes the tabloid version of this story. The Guardian reports:

The justice secretary told a fringe meeting organised by the Daily Telegraph: “I’ve never had a conversation on the subject with Theresa, so I’d have to find out about these strange cases she is throwing out.

“They are British cases and British judges she is complaining about. I cannot believe anybody has ever had deportation refused on the basis of owning a cat. I’ll have a small bet with her that nobody has ever been refused deportation on the grounds of the ownership of a cat.”

The UK Human Rights Blog has taken this up.

The decision of the Asylum and Immigration Tribunal by Senior Immigration Judge Gleeson (IA/14578/2008), dated 1 December 2008, can be read here. It is only two and a half pages long. Judge Gleeson explained that the reconsideration was granted in reference to

the inappropriate weight placed on the appellant having to leave behind not only his partner but also their joint cat, [ ]

The judge rather cheekily anonymised the cat’s name, which is almost certainly an attempt at humour, given the final line of the judgment:

The Immigration Judge’s determination is upheld and the cat, [ ], need no longer fear having to adapt to Bolivian mice.

Here it appears that the Home Office had failed, until the day of the appeal, to follow guidelines issued earlier that year – and so it would have lost anyway, cat or no cat.

Thereas May has already attracted the attention of human rights lawyers once this week, when she called for the Human Rights Act to be abolished because it had led to decisions against the Home Office. From the same weblog:

The Home Secretary Theresa May’s has told the Sunday Telegraph that she would “like to see the Human Rights Act go“.

There is plenty of nonsense out there about the Human Rights Act. For example Emma McClarkin – a member of the European Parliament no less – said on BBC’s Politics Show (at 5:15) that we are “hamstrung by the European Charter of Human Rights”; a charter which does not exist.

This term is a classic example of a legal translation problem. It was used in a medical context, where such a specific legal term was complete overkill, and the medical translator had trouble researching it, unsurprisingly.

The general context was: This patient had an injury, and the haftungsausfüllende Kausalität between the accident and the injury to health has been proved.

But in another context it might be necessary to explain the term. One port of call is my ancient edition of Hans Brox, Besonderes Schuldrecht – just occasionally, German students’ textbooks are the best resource – which has index entries:

This is the German way of determining whether a defendant is liable for an injury. The common law looks at causation in a similar way, differing mainly in detail. The German approach is very theoretical, but so is the American approach.

Now I wonder what Markesinis and Unberath, The German Law of Torts, have to say about this.

Causation
French lawyers, paraphrasing Voltaire’s dictum about the existence of God, have often teased the Germans by saying that if causation did not exist as a subject it would have to be invented so that German lawyers would have something to exercise their minds.

Markesinis says that the Germans, like the Americans and the English but more clearly so than the French, take a bifurcated approach to problems of causation.

The first stage, haftungsbegründend above, requires that the defendant’s conduct is a conditio sine qua non of the hurt, which is better know to Common lawyers as the ‘but-for’ test.

By the way, when I write of the defendant, German texts refer to der Täter or der Schädiger.

There doesn’t seem to be a close equivalent to the second stage in English tort law. The question of foreseeability and directness of consequence arises. There is a term used in the USA in this context, and that is proximate cause. To quote another textbook, Kenneth S. Abraham, The Forms and Functions of Tort Law, ‘Use of the term “proximate cause” is unfortunate and misleading.’

Indeed, the term proximate cause has made it to Language Log, where it was discussed by Roger Shuy, my second-favourite writer there. Interesting links there too. The term came up when a lawyer was a juror and other jurors asked him to define the term. Tiersma is quoted as giving proximate and cause as problematic words.

I note that there is a discussion of this on ProZ. The discussions there are often helpful. Beate Luetzebaeck is very reliable (she’s trained as a lawyer in both common law and German systems). The asker chose proximate cause, which appears wrong to me, especially when contrasted with contributory cause – that’s not the distinction made in German.