I don’t get many comments on this site at the moment. This is partly because I accidentally barred all comments for several months when I was dealing with comment spam.

At the moment, comments have been banned for a couple of days but are now released again. This was because the number of spam comments increased to ten an hour. These were the ones that claim to come from Facebook users. None of these spam comments ever appear, but it takes time to remove them from the spam filter. In principle, though, comments are possible. But I will be taking a partial break from May 1st, which means posting will be slow to non-existent, and I may have to close comments down temporarily again.

Kevin Lossner has criticized my captcha, but I don’t have much choice using the current software. I tried it without a captcha – since spammers can now automatically read the captcha, I thought it might make no difference, but no, it was even worse.

A couple of weeks ago, on Catherine Translates, Catherine Jan had a post called 10 questions for fellow bloggers. There are now 44 comments, although not 44 replies. I thought it was interesting. It makes a refreshing change from those weblogs which appear out of nowhere and announce that they’re having a competition for the best (language) weblog, thus ensuring themselves a ton of links. 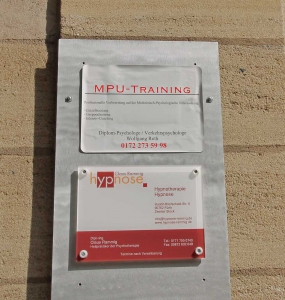 This is just some background information on Germany. The photo is not easy to read, but it says that Traffic Psychologist Wolfgang Roth can prepare you for the Medizinisch-Psychologische Untersuchung (MPU). This is going on all over Germany. It is also known as the Idiotentest.

If you lose your driving licence for drunk driving here, for example, you have to do this psychological test to decide whether you can get your licence back. According to Wikipedia (German – there is an English Wikipedia article too, but it is much shorter), the test takes from three to four hours. It consists of medical tests, a ‘psychological conversation’ and some tests on the computer. I was told once that it included the Rohrschach test, but apparently there are some apocryphal stories about what it contains. It says that in Russia, every driver has to pass a test like this every three years.

People get very exciting about this test – here are some on Toytown Germany:

a) The MPU, or Medizinisch Psychologische Untersuchung, is a scandalous piece of legislation considered extremely suspect by Road safety and Psychology professional alike, and frowned upon by Brussels.

b) There are not hundreds of thousands, there are about 100.000 a year, and there are 50 million people with a license. And about half of the cases are related to drunk drivers having lost their license and have later to undergo examination wether their drinking habits have changed if they want their license back. Anythin wrong with that? Not for me.

Anyway, there was a judgment – a preliminary ruling – of the CJEU on 26 April holding that it’s OK for someone who’s lost their licence for drunk driving in Germany to get a new licence in another EU country. This is probably the decision (Case C‑419/10).

I got the impression from surfing the Web that a company in the Czech Republic is already offering a new driving test, and even one with a ‘positive MPU’ – that is, you cannot fail the MPU.

Trivia: Wikipedia has pictures of the first German driving school in 1906. Further investigation indicates that the first British woman to pass a driving test did so in 1900. She had to go to France – there was no driving test in Britain till 1935.

Here’s a site (in German) where you can get assistance and more information on the subject.

Here are some pictures taken in the Stadtpark recently, showing a curious feature of Germany – shepherds sometimes turn up in the middle of town with their flock. I wonder what roads they come along? There were three dogs and an electric fence, which was moved around so they cropped different areas every day. 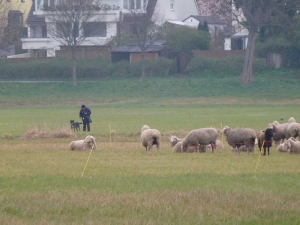 On this one you can even see a stork on the nest on top of the chimney at left: 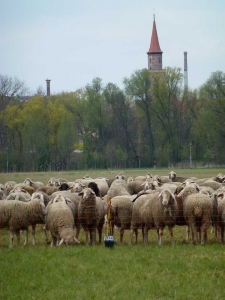 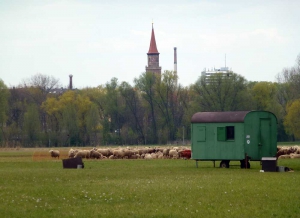 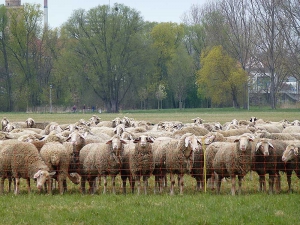 The only remaining question is why German lamb often tastes so mild.

The recent decision of the Hamburg Regional Court on GEMA v. YouTube has been variously reported in English – for instance by Birgit Clark on IPKat.

In this decision, a wonderful legal translation problem arises: the term Störerhaftung (literally disturber’s liability). This is a term which doesn’t exist in English law and has a widish range in German law, of which the internet form is only part.

You can read about it at great length if you download Alexander Hartmann’s Ph.D. thesis Unterlassungsansprüche im Internet (so this is what he was writing when he started the jurabilis blog). It becomes clear – or unclear – from this that even defining the term in German is far from straightforward.

So if you are looking for a global term covering all potential meanings of Störerhaftung, the search is doomed to fail, and we will stick to the internet context and create a term, and the first time it comes around will put the German term in brackets. This is what is done on IPKat:

The court disagreed with defendant and held that YouTube was not liable via the legal instrument of “Täterhaftung“, that is by actually having committed the infringing acts itself, but could only be held liable via the principle of disturber liability (“Störerhaftung”).

This absolutely does the job. An alternative to disturber is interferer, which I slightly prefer. But it remains that it seems odd in English to see YouTube as a disturber or interferer. (I tend to see GEMA as a disturber!). Störerhaftung is a term which has been mentioned on IPKat before, btw.

Nevertheless, the Bundesgerichtshof held that Rolex had a claim to an injunction based on the German legal principle of Störerhaftung, which may be translated as “disturber” or “interferer” liability,… since ricardo had wilfully made an adequate causal contribution to the infringements.

And here is another mention in a discussion of that case,

Issuing an injunction against hosting providers in Internet law is based on the German principle of Störerhaftung which can be translated as the liability of a “disturber” or “interferer”45. It is important to note that interferer liability is a long-standing principle which has existed for many years and is now being applied to Internet law. This principle protects absolute rights pursuant to secs 823, 1004 of the German Civil Code. It means that anyone who somehow contributes deliberately and adequately causal to the infringement of a protected right can be subject to an injunction, without being the perpetrator or an accessory. Trade marks are such protected absolute rights. Injunctions can be issued regardless of negligence or fault. However, this action does not result in monetary compensation for the trade mark owner.

(‘Adequately causal’ should be an adverb phrase, ‘with sufficient causative effect’).

A Störer is therefore someone who is not a prepetrator or an accessory. Other translations found, e.g. on Linguee, include co-liable party, which works well, I think, and (for Störerhaftung) breach of the duty of care, which seems far too woolly. One also finds troublemaker, which refers to a completely different use of the same word Störer.

On Antitransblawg I started by saying: don’t translate Rechtsanwalt as solicitor.

Comments and questions are welcome in tweets.

There won’t always be explanations here.

1. In England and Wales, the legal profession is divided into solicitors and barristers (‘the divided profession’).
In Germany, there is no such division. Rechtsanwalt is therefore a broader term. As I say under 4. below, it can be good to take a broader term (e.g. lawyer) – but it is a bad idea to take a narrower term (solicitor, barrister).

David Hole in Munich did the transfer test, so he can call himself both a solicitor and a Rechtsanwalt.

3. Lots of translators who live in the UK and work for UK clients use the term solicitor as a translation, and so do lots of British people (‘My sister is getting divorced in Germany, and her solicitor says…’). Well, this may well work in general waffly contexts.

Here’s a discussion on ProZ. In the text there, there was a reference to a notary who was also a Rechtsanwalt (this is the case in some Länder) so lawyer was not a good term to distinguish Notar and Rechtsanwalt.

4. Other terms are lawyer (a very broad term, but certainly OK – and in legal terminology it’s often useful to go to a broader term for a solution) and attorney (which I like, although some think it is too unfamiliar in the UK – but historically it was used. I don’t particularly like adding ‘at law’, although I suppose it will increase your earnings if you are paid by the target line/word.

Antitransblawg on Twitter: how not to translate from German to English, mainly legal vocabulary.

Tweets should appear in the right-hand margin (still working on that).

Every few years I get a text with an environmental element and I have read so many people using the non-existent English word immissions that I begin to wonder if I am going mad.

German has this nice contrasting pair, Emissionen and Immissionen, for pollution emitted and pollution received. I gather that the big problem began when some years ago the Bundesimmissionsschutzgesetz was translated as the Federal Immission Control Act. At all events, according to a colleague of mine who may or may not wish to remain nameless, a translator tried to deal with the problem by introducing the word immission into English, but the meaning never followed.

I have it on excellent authority that native speakers of English who talk about emissions from power plants never ever use the word immission. 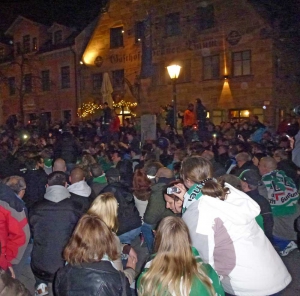 This evening, scenes of extraordinary jubilation on the streets of Fürth ostensibly marked the football team’s ascent to the first division. But readers know they were really celebrating Transblawg’s ninth birthday (I forgot about the eighth in 2011). The song was ‘Nie mehr zweite Liga’. 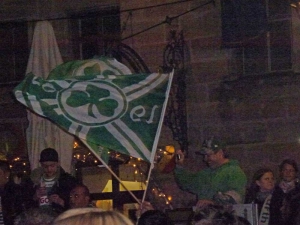 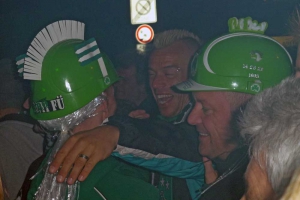 Quick reaction from a lotto shop in the Schwabacher Straße: 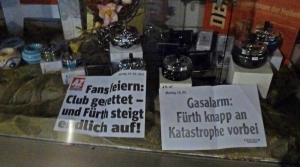 (I see Sinosplice is exactly one year older, but has curious ideas about what day the week begins on). 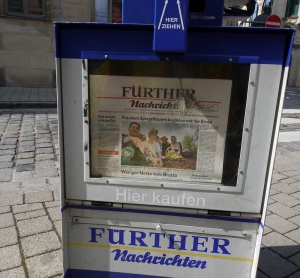 Here’s a photo showing the story on the front of the local paper. But the really good photo of this scene is inside the paper – see the article Noch ist es dem Spargel zu kalt. I wish I’d been there to take that second photo, showing an asparagus photoshoot with numerous walk-on parts in very cold weather, but as I wasn’t, I’m not allowed to publish it direct.

Instead, here is an offer for a reduced-price asparagus plate and matching tongs, so you can pick it up carefully. 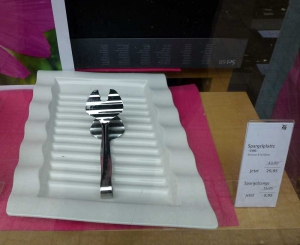 I won’t be needing one of these myself. Unfortunately, as reported here every year, we will be hearing little except effusions about asparagus here for the next several weeks.