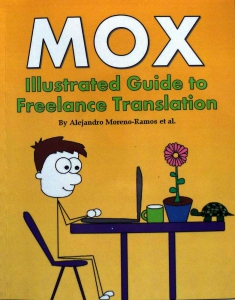 I finally got around to buying Mox – Illustrated Guide to Freelance Translation. I always like seeing the cartoons on the blog, but I seem to have missed the book actually being published.

Alejandro Moreno-Ramos is a translator from English and French to European Spanish, trained in electromechanical engineering, who has been publishing cartoons on the web for some time about Mox, his alter ego:

Mox is a young but well educated translator. Two PhDs, six languages… and he hardly earns the minimum wage

Some of the cartoons are based on ideas sent in by other translators, and the book contains a number of articles by some of the most famous translators on the interwebs. 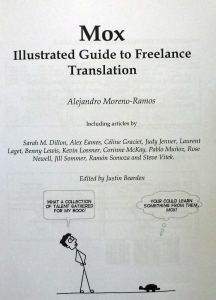 My favourite cartoons were those where St. Jerome shows Mox the various circles of translators’ hell (only six here) and the local translators’ association (‘We meet once a week over some beers. Our main real activity is to complain among ourselves about low rates’).