Ben thanks his mother for encouraging him to study at the Open University. He calls in a

to do the honours.

Ben, like most other Open University students, had someone to support him through his studies. His tutors, fellow students and family all encouraged him along his learning journey.
But instead of simply saying ‘thank you’ to Jennifer, his mum, for inspiring and motivating him to study, we helped him to do something a million times better.
“I used to be a removal man. My mother sat me down and told me I was so much better than that and I should use my clever brain. I am now working for an ‘in-house’ legal team whilst on my fourth year of a law degree. Thank you.”

Tomorrow, September 30, St. Jerome’s Day, is also called International Translation Day, but it appears to have been taken over by translators of literature.

Amal is an educated and successful career woman we’ve long admired. The high-flying barrister has notched up many career highs, including representing the controversial WikiLeaks whistleblower Julian Assange, and also has multilingual fluency in English, French and Arabic.

We think this George Clooney fellow has scored big time.

He’s been quoted as saying he was ‘marrying up’… we agree.

Amal Alamuddin is a barrister specialising in international law, human rights, extradition and criminal law. She has represented clients in cases before the International Criminal Court, the International Court of Justice and the European Court of Human Rights, as well as in domestic courts in the UK and US.

Amal also provides advice to governments and individuals on international law, and has been appointed to a number of UN commissions including as adviser to Special Envoy Kofi Annan on Syria, and as Counsel to the Inquiry launched by UN human rights rapporteur Ben Emmerson QC into the use of drones in counter-terrorism operations.

Amal is fluent in French and Arabic and has particular expertise in international criminal law and the Middle East region.

In The Guardian: Ten objects that made modern Germany.

This is gearing up to the British Museum exhibition and BBC radio series. They offer:
wetsuit used for attempting to escape GDR via Baltic; Tischbein’s portrait of Goethe; Würstchen; Dürer; Meissen (I feel that Dürer’s porcelain rhinoceros is misphrased); Volkswagen; Kollwitz; Buchenwald; Trümmerfrauen; and Barlach’s Angel.

I would like to offer an alternative set. The term ‘objects’ is used loosely so I have a wide field:
Aldi
Birkenstock
Dr. Oetker’s blancmange powder

Additions welcome. There will be more in the British Museum exhibition, of course.

I feel (and am) rather aged coming back to London after more than thirty years.

I didn’t know how difficult it is to get called Ms – just by spelling it out you draw to yourself the attention you didn’t want.

I thought it was only in the USA that things like ‘Howdy, MMarks’ (the way WordPress greets me backstage) were encountered, or Moo cards originated (posted in a box marked ‘Yay!’, and apparently can’t be received in a plain envelope).

But today at Sainsbury’s, joining the queue for personal service and buying a ‘southern fried chicken wrap’, I am met with ‘Babes, why don’t you get a Meal Deal?’

A mailing-list colleague says how much he dislikes Virgin Mobile addressing him as ‘Peeps’!

To quote another poster:

Office 2013 has bits of that. When one finishes a spell-check, a pop-up box announces:
“Spelling and grammar check complete. You’re good to go!”
After doing something else, it answers: “We did that for you.” Who’s “we”?
Somewhere else it replies, “Nope.”

I suppose I am becoming the old person I was destined to be.

Anyone else having difficulties with the modern world?

Volker Weber proves that online machine translation is at least no worse than what the Cologne Customs Office can do.

PDF of the original.

A web search reveals that this version is used at least in Erfurt too.

Some years ago some German courts provided forms containing German and a Denglish translation, into which the translator who was commissioned had to type the not-yet-translated bits. A colleague used to come into college and use the secretary’s typewriter to do this. I suppose they may still do it with PDFs. It was always an eye-opener to see that the courts were incapable of ordering a comprehensible translation, and it wasn’t much of an incentive to do better.

I’m glad we can call Quark quark now, which does away with the problem of ‘translating’ it as curd cheese or cottage-cheese-without-the-lumps (Hüttenkäse!), almost as dreadful as the problems of translating Zwetschgen.

The Daily Mail is today touting it as a superfood:

Rise of the soft cheese that can help you lose weight: Sales of ‘superfood’ quark rocket 40% in a year

It’s every dieter’s dream: the cheese that could actually help you shave off those extra pounds.
Sales of quark – a soft cheese that’s virtually fat free – have rocketed by 37.9 per cent in the last year.
Health-conscious Britons forked out a staggering £8.5million for the ingredient, a jump of £2.3million from the previous year.

I am mystified by the term ‘virtually fat free’. That sounds like low-fat quark to me, the stuff I refuse to eat but have accepted, if reluctantly, as a poultice (Quarkwickel sounds like a sort of samosa but isn’t).

But it looks as if Lake District Quark don’t do anything but low-fat quark. They call it ‘naturally fat-free’. They must have got hold of some fat-free cows. And Jennifer Lopez and Carole Middleton are apparently fans.

If consumers are familiar with European Quark, they will notice a distinct difference with our British Lake District Dairy Co. Quark as it is noticeably smoother in texture and more spoonable making it more versatile and perfect for cooking, baking and mixing.

As the Germans would say, that’s a load of Quark (das ist doch völliger Quark!).

Südmilch, for instace, sell it in qualities from low-fat to 40° Fett in der Trockenmasse (fat in dry matter).

I think quark desserts may be a good way of getting some people to eat more protein. We can get French soft cheese desserts now, but they seem only to be produced in child-size containers.

If you’re keen to get quark in the UK other than low-fat quark, it looks difficult. German Deli has a certain amount, but not only is it Milram Frühlingsquark, which means it’s mixed with herbs and stuff, but it’s described as containing ‘skimmed quark’, and Aldi also apparently has a fat-free version.

Trevor pointed this series out to me. I can completely missed it.

In particular, an issue in 2013 on legal translation:

No 12 (2013)
Research models and methods in legal translation

I will be coming back to this. This looks promising:

This paper aims to determine the extent to which a corpus-based, phraseological approach can be effectively applied to discriminate among near-synonymous, semantically-related terms which often prove troublesome when translating legal texts. Based on a substantial multi-genre corpus of American legal texts, this study examines the collocational patterns of four legal terms ‘breach’, ‘contravention’, ‘infringement’ and ‘violation’, first in the genre of contracts and then in the multi-genre context of the entire corpus. The findings highlight the area of overlap as well as specificity in the usage of these terms. While collocational constraints can be argued to play an important disambiguating role in the semantic and functional analysis of both source and target text items carried out by translators prior to the interlingual translation, this study emphasizes the applicability of the phraseological approach to English source texts.

You can get the whole document as a PDF. I will return to it in a separate entry.

These struck me too:

Notarial documents have some translation-relevant particularities which are strongly associated with the legal culture of the respective country. They are subject to competing influential factors – among others laws and administrative provisions, the facts of the case, form books, notary offices, and the recipient of the document – which determine the content, the specific structure and the language of notarial documents. In addition to the basic parameters of translation, translators should know and tackle the common features and the differences between the notarial documents of the countries concerned in order to produce a professional translation. This paper examines the most important common features and differences between Italian and German real estate sales contracts and presents the implications for translations from Italian into German against the background of the basic parameters of translation.

Investigating legal information in commercial websites: the Terms and conditions of use in different varieties of English
Federica Scarpa

The Terms and conditions of use which are embedded in commercial websites provide a standardised legal model based in common law which exemplifies the increasingly influential role that English plays in international and intercultural commercial and legal settings, but also how deeply rooted legal knowledge is in socio-cultural values and national cultures. Using a small monolingual corpus of Terms and conditions of use drafted in English and embedded in the commercial websites from different countries of origin and legislations based both on common law and civil law, the paper investigates the extent to which different layout/content and language features are displayed by: (1) ELF Terms and conditions translated from different languages/legislations, and (2) ENL non-translated Terms and conditions drafted in different ‘core’ varieties of English. The aim is to show that the English intralingual variation of this highly structured and conventionalised legal format reflects in fact the existing disparities in legal practice among various national legislations, even among systems belonging to the common law family. International legal models such as the one investigated should consequently be considered as “globally-relevant STs” (Adab, 1998, p. 224), i.e. flexible text formats that have been adopted by most countries but at the same time allow for local socio-cultural aspects to influence the construction of legal discourse.

I am surely not the first person to wonder how far free-range eggs (Eier aus Freilandhaltung) actually range.

They breed an infinite multitude of chickens in a very curious manner; for the hens do not sit and hatch them, but a vast number of eggs are laid in a gentle and equal heat in order to be hatched, and they are no sooner out of the shell, and able to stir about, but they seem to consider those that feed them as their mothers, and follow them as other chickens do the hen that hatched them.

I don’t think More foresaw these: 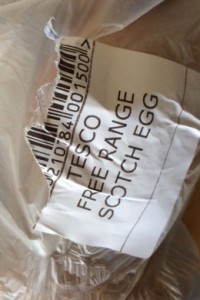 It seems you can also get free-range pickled eggs, albeit from England – but after today’s referendum that might be necessary.