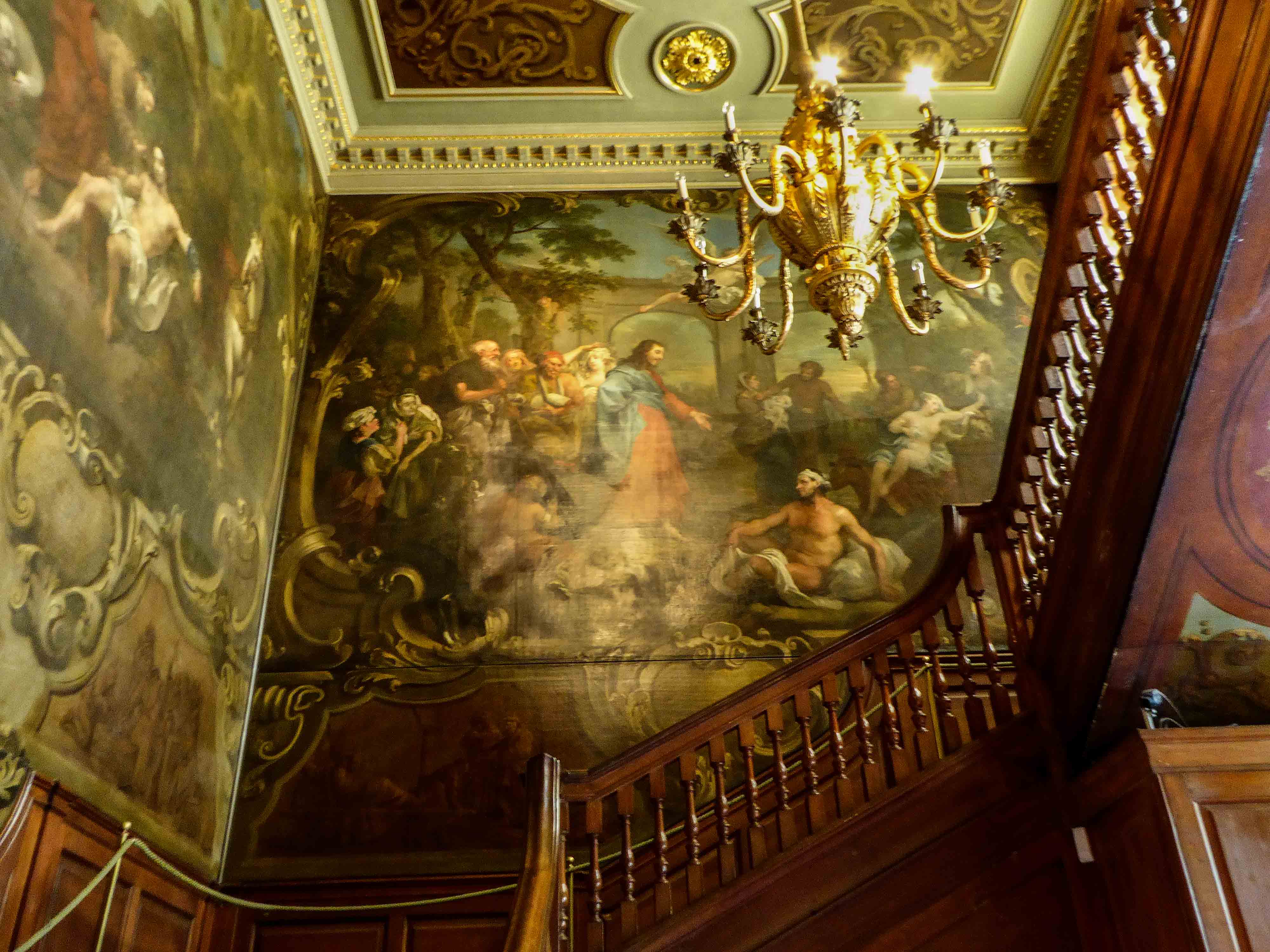 Paintings by William Hogarth on the staircase in the North Wing at St. Bartholomew’s Hospital, the Good Samaritan on the left and the Pool of Bethesda on the right, figures probably based on patients at the hospital at that time – possibly showing rickets, mastitis/breast cancer, gout, syphilis, gonorrhoea, jaundice/depression, obesity, emaciation. Unfortunately you need a guided tour to be let in to see them properly. The easiest way to see the figures is in this plate, made available by www.albion-prints.com here: 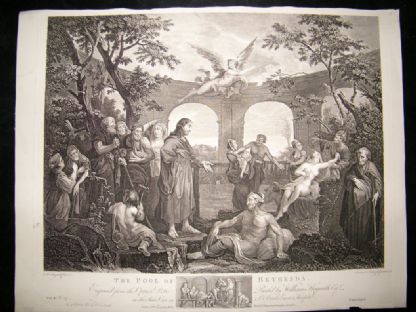 The central protagonist is the man unable to reach the pool to be healed on account of a chronic ulcerous wound on his leg. The painting shows a scene from The Gospel According to St John, in which a man that has been unable to walk for many years is healed by Jesus. Much like St Bartholomew’s temple on The Tiber in Rome, Jerusalem’s Pool of Bethesda was thought to have healing properties. On occasion, the water would become disturbed and this was believed to be by an angel, who can be seen at the top of the painting, departing having made a pass over the water. Whomever entered the pool after the waters had settled again would be exposed to its healing properties. The man unable to walk was alone and no one would help him to the pool’s edge. Jesus took pity on him and healed him without the need of the water’s powers. So here he is, beneath Jesus’ kindly gaze. His physical stature has often been remarked upon and more recently it has been suggested that he is suffering from Myotonia Congenita, causing enlarged but weak muscles and ulcerous wounds. Others hold that it is a reflection of the influence that Hogarth took from the classical style of painting. Behind him is a mother holding a child with rickets, depicting the pronounced forehead, curved spine and inflamed joints of the disorder as described in the 18th Century. The fidelity of this portrayal may reflect Hogarth’s friendship with John Freke, a surgeon at Barts that trained Percivall Pott’s mentor, Edward Nourse. Freke had written on the subject of rickets in 1748 and may have provided Hogarth with the information and possibly even a model for its accurate portrayal. Although a diagnosis of rickets certainly makes sense, others have suggested the differential diagnosis of congenital syphillis – common in Hogath’s time and an illness that would also fit the bill.

The Gentle Author has also dealt with this picture in detail at Spitalfields Life, but seems less impressed than I am: Hogarth at St Bartholomew’s Hospital:

I cannot avoid the conclusion that “Jesus at the Pool of Bethesda” was a misdirection for Hogarth. It has more bathos than pathos. He aspired to be an artist in the high classical style, yet we love Hogarth for his satires and his portraits. … Far from proving that an English artist could excel at the grand historical style,”Jesus at the Pool of Bethesda” illustrates why this mode never suited the native temperament. All the qualities that make this painting interesting, the human drama and pitiful ironies, are out of place in the idealised landscape that suited the tastes of our continental cousins.