King’s College German Play, Der Besuch der alten Dame (The Visit), had its first night on 7 March and there is another performance on 11 March. I saw it with another former King’s student. Everything has changed since the late sixties. The students are a mix of nationalities and subjects – European Studies, European Politics, War Studies, Comparative literature. It was an excellent production with great pace. It really was over in 2 hours so they must have cut quite a bit; the play is rather wordy. Some of the students speak very fluent German.

There are English surtitles – actually a block of text from a translated version of the play. Obviously it had to be cut to the right length, but was it a published version or done by the students themselves? I saw this with Nathan der Weise in Berlin, where they had a rather aged English translation.

The play was on in a place called Tutu’s on the 4th floor of the Macadam Building in Surrey Street. It was dreadfully cold there! The performance used projected images and sound effects – for instance the trains passing through at the beginning – and few props (I missed the coffin, but it wouldn’t have worked here). Desmond Tutu is an alumnus and a rather weird sculpture of his head is above the door: 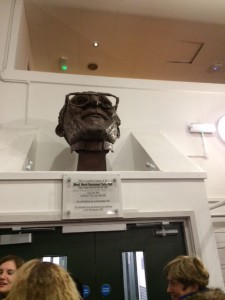 We went in memory of the plays we remembered from our own time as students, shockingly 50 years ago. I remember Biedermann und die Brandstifter in 1966 and Minna von Barnhelm in 1967. The current offering is an old chestnut too. But it’s still being performed in the real world and you can see video clips from Bochum, Zurich, and Berlin online (probably there are more out there too).

The KCL version is on a bare stage – here are some photos I stole from the KCL German Society Twitter feed: 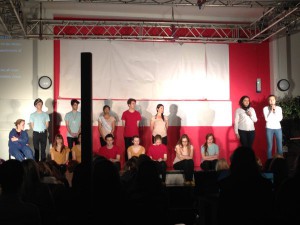