Herlinde Koelbl: photos of Angela Merkel over the years.

There is also Pantone Merkel by Noortje van Eekelen: 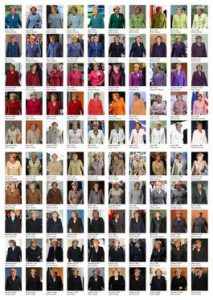 LATER NOTE: An article in The Guardian showing some of the Herlinde Koelbl photos.

EVEN LATER NOTE: There is also an Instagram account called merkellooks, collecting all kinds of images of Merkel.