I always thought Amerikaner were a German thing and wondered where they got their name from, but it turns out they are a New York cookie (via smitten kitchen). 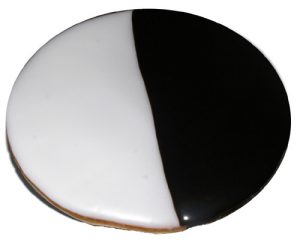 Amerikaner certainly used to be made with a form of ammonium carbonate called Hirschhornsalz (Salt of Hartshorn/baker’s ammonia) in German. This is widely sold in Germany, especially at this time of year. I saw it being used by London Eats, who posts Christmas cookies from abroad at this time of year:  Fedtebrød.

If you don’t want to make do with baking powder or bicarbonate of soda, the German Deli sells Hirschhornsalz, and also potash and Lebkuchen spice.