I have been here before (Judgment and judgment), in 2012, and I quoted Lord Neuberger.

Now, Joshua Rozenberg, in A bad day for Jay J, in the Law Society Gazette, mentions the spelling difference again:

It was the family lawyer James Turner QC who set Twitter alight by observing that Wilson had taken the trouble to refer to ‘editorial judgement’ (following the spelling in the statute) but the court’s judgment (following conventional usage). Many of my followers recalled being taught, as students, that a judge uses judgement to write a judgment. News to me; but perhaps I am too judgmental.

(The reference is to Lord Wilson in the Supreme Court).

I missed the Twitter storm, but it doesn’t seem new.

More fromd yesterday. The lady with the black structure on her head is the Queen’s Remembrancer, the first female holder of the role, Barbara Fontaine. 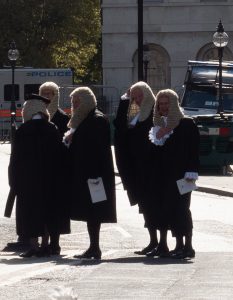 I don’t know who those in thin red robes are nor what they wear under their robes – this recalls an early photo of Princess Diana. The other shot shows the spikes in the  road.

I’m afraid the light was difficult, I had the wrong lens on the camera at first, and there were more police in the way than three years ago – and also a metal ‘carpet’ containing spikes across the road.

This is Sir Rabinder Singh, the first Sikh Court of Appeal judge, also a legal academic. He wears a turban instead of a wig. And the second photo shows a photographer upskirting some circuit judges. 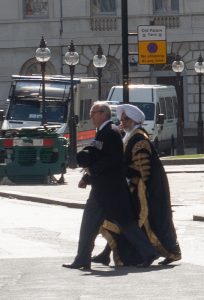 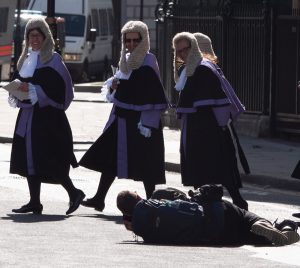 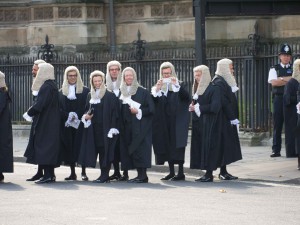 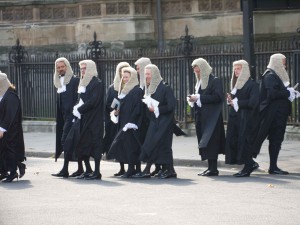 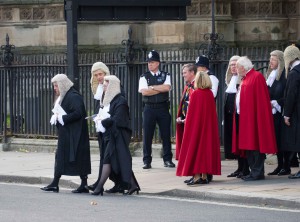 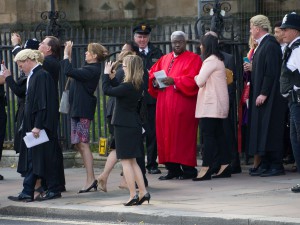 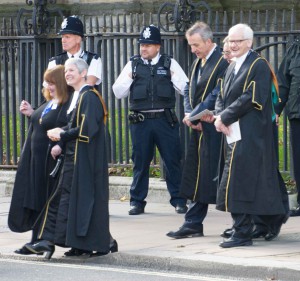 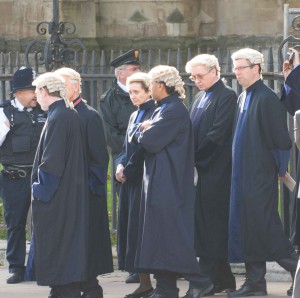 So today really is the birthday of the current Lord Chancellor!

My first hope for the election would be that we could have a different Lord Chancellor, perhaps a lawyer, but at least one who acts lawfully and doesn’t make one ashamed to be British.

See Jack of Kent on Grayling: the Lord Chancellor who told the High Court to disregard the Rule of Law

How to address judges

This is now outdated. There is now a Ms Justice.

A high court judge, Alison Russell, QC, has become the first to be formally addressed as Ms Justice after being given permission to use the title in court.

Judges in the high court are normally referred to as Mr Justice or Mrs Justice but Russell, who joined the bench full time in January and specialises in family law, was allowed to update the traditional form.

They have been called Mrs Justice before, whether married or not, because Miss Justice sounds like misjustice.

But then there was a time when Dame Elizabeth Butler-Sloss was called ‘Lord Butler-Sloss’.

Dame Elizabeth, who is sister to the late Lord Chancellor, Lord Havers, and aunt to the actor Nigel Havers, became a High Court judge in 1979 at the age of 46. In 1988 she broke new ground when she was appointed to the Court of Appeal. She was called Lord Justice Butler-Sloss and “My Lord” for six years until the then Master of the Rolls, Sir Thomas Bingham, said that she could be called Lady Justice Butler-Sloss.

One question is why indicate a judge’s sex at all. I see that if a text refers to Mrs Justice or Ms Justice, you know it’s a woman judge. It may be a good thing that people realize that female judges exist, or it may be unnecessary discrimination. In a German text, it would always be ‘die Richterin’. I remember correcting students for translating that as ‘the woman judge’ (a colleague famously took a mark off for just writing ‘the judge’ and thus missing out part of the meaning).

The translation question also arises with ‘Frau Schmidt’ and so on, where the translation needs an English title. Ideally the client should know whether Mrs, Miss or Ms will be preferred. If you don’t know whether the Frau is married or not, will she be offended to be called Ms?.

It is very difficult to get called Ms here in the UK. The fact that people don’t believe it can be pronounced on the phone is one thing – I seem to spend hours hanging on the phone trying to sort things out – but there seems a tone of ill-will sometimes if I insist on it. I therefore pass as Miss a lot of the time, since Dr feels like overkill and I don’t want to pass as Mrs (airlines usually give the choice between Mr and Mrs).

My feeling is that things were different here thirty years ago. I was shocked when I first received a birthday card from a relation addressed to “Miss”. And I discover that when I ask companies to write to me as “Ms”, there is either surprise at my insistence or irritation. My surprise isn’t because in Germany every woman is “Frau”, but because things have changed in this country. Eve Kay confirms my feeling:

A quick survey around the offices where I work uncovered an interesting generational divide. Most of the women under 30 had never even heard of the title Ms and couldn’t understand why I was so worked up. Equally, most of the women over 30 were vociferously in favour of Ms and thought the title Miss preposterous. Elisabeth Murdoch, chief executive of the company I work for, noted: “You become a Ms as opposed to a Miss on your first day as a professional … I don’t think you take a Miss seriously (nor would you take Master seriously). And, as for the choice of Mrs – I am not someone who subscribes to the idea of assuming your husband’s identity rather than your own.”

A note on punctuation: BrE says Mrs, Mr, Dr, Ltd are contractions, not abbreviations, so take no full stop at the end. I suppose that Ms is the same, even if no one is sure what the long form is. AmE tends to put a full stop (period).

The Leveson Report, the result of the Leveson enquiry on press law, has been published today. The Guardian summarizes:

Leveson said that his proposed new law would enshrine “for the first time” a “legal duty on the government to protect the freedom of the press”. It would also allow the new body to set up a low-cost libel and privacy tribunal to handle complaints instead of the courts – and provide “benefits in law” to those who signed up. Those who do not sign up would be denied the ability to reclaim the often substantial costs of litigation – even if they win – from complainants bringing libel, privacy or other media related actions.

The question now is: why do so many people who should know better think that Lord Justice Leveson is a lord?

A Lord Justice is a judge in the Court of Appeal.
Judges in the House of Lords were Lords. Now the court is the Supreme Court.

Judge John Neilan is a judge at a district court in Ireland. That is similar to an Amtsrichter in Germany. There are judges like this in all countries, I should think. I have seen a couple of links recently to his pronouncements. They were found after an incident last week in which a solicitor accidentally hit him with a shotgun pellet when demonstrating an air pistol in court.

Here’s an article about his earlier claims to fame:

His manner of administrating the law is unusual. His role allows him propound at will from the bench, often on matters that are outside the function of his office.

Last Thursday was a typical day. Mid morning, a Latvian man appears on a drink driving charge. An interpreter, a regular presence in district courts these days, steps forward. Earlier this year, the judge opined that eastern Europeans should be charged for the service of interpreters.

The defendant doesn’t have a solicitor and wants to know how much one would cost.

“I’ve no idea, ” Judge Neilan says. “Four or five hundred euro. When I was doing it 35 years ago you had to wait for a fair day to get a few bob.” He then tells the interpreter not to bother translating the last bit.

A young Estonian man is up on a charge of petty larceny from a shop. Judge Neilan begins another speech. “There was a Latvian gentleman in Longford a few months ago who was destitute and I asked him did he want to go home instead. I contacted the department and they said there were no resources. Nobody would pay. These offences occur because this man has no resources. If he wants to go home I have no difficulty with that. People are coming from these countries and they quickly fall down.”

The judge then enquires if the man wants to go home, and the interpreter replies he doesn’t.

“No harm in trying, ” the judge says.

Business owners try (successfully) to stave off being wound up:

‘It aint our fault, the stoopid court froze the bank account so we cuddent pay the stoopid bill could we, but we done it today some’ow like’

The other director chipped in ‘Yeah, our account is managed by the banking equivalent of Mr Bean’

Everyone looked at the judge. Possibly because these two guys looked as if they meant business and would beat up anyone who would disagree with them.

The judge looked up ‘I am afraid that you will find that the whole British banking system is being run by the equivalent of Mr Bean!’

From an entry about winding up day at the law courts in London by Swiss Tony.

Another entry on the same topic by Paranoid Pupil.