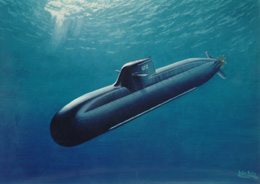 Deutscher Bericht in der Süddeutschen Zeitung.
The 212A is a newly developed submarine being produced in Germany and Italy, running on a fuel cell that makes it particularly quiet and allows it to stay submerged longer, so a number of other states are interested in the details.

Michaela T. is a German translator who went to the USA some years ago, had an American passport and lived in Canada with her husband and children. On her ProZ home page she calls herself ‘The German-English translator’, and she mainly translates into English.

Last year Michaela T. was commissioned to translate a military manual of the HDW shipyard in Kiel (see picture and links above). She translated the book, with assistance of others, and there were payment problems. The job had been worth 100,000 dollars. She then phoned up the Chinese Embassy in Ottowa and offered to sell the manual to a Chinese secret service official. However, the line was tapped. She later offered the manual to an undercover agent, and it will have to be established in court whether this was a case of entrapment or whether the initiative came from her.

Michaela T. was arrested in the autumn when she was visiting her father in Germany, and she is now in pre-trial custody. The story has long since been reported, inter alia by Richard Schneider at the Übersetzerportal and on Translators Cafe, but the Süddeutsche article is new (see latest Richard Schneider article).