German has a number of regional terms for many vegetables. I’m conscious of now saying Orange instead of Apfelsine, or wondering what to call a turnip. I usually say Karotte, but I hear Möhre here too for carrots, Mohrrübe less often and gelbe Rübe not at all, but perhaps in Munich.

But these purple carrots (from Texas, I think, a cross between old purple carrots and newer orange ones) are labelled Urmöhre trifft Karotte. It’s as if Möhre were the older word (before the 10th century – Morchel started as a diminutive of it) and Karotte the alien upstart (borrowed before the 16th century from Dutch, which had it from French and Latin – etymology from Kluge). I don’t know in which century carrots went orange, though. I remember Madhur Jaffrey or maybe Claudia Roden referring to a bleeding Indian carrot, and not as a term of abuse. 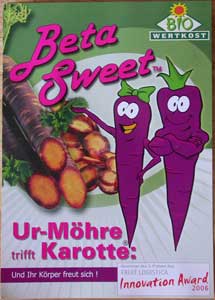 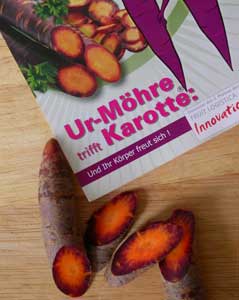