Here is Rudolf-Breitscheidt-Straße from the western end, looking towards the prospective shopping centre site. A sort of glass wall will cut across this street. In the distance, the tall building is the Park Hotel, which is not listed and is available for demolition. This side of it is the former Fiedler department store (clothes and household furnishings), marked with its name, now largely disused, and nearer, spot the Commerzbank building, rather an eyesore. 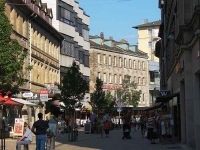 We have now moved along the street and are looking at the right-hand side at the other end of the development. The Park Hotel is out of view, to the left. On the right, distant, is the former HypoVereinsbank building, which is to remain. This side of it the cinema, and nearer the camera some low buildings, listed, which are to be pulled down. 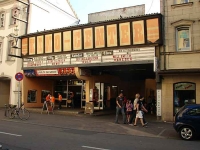 Here is part of the area behind the cinema known as the Wölfel-Areal. This rather Chandleresque area will probably be missed by no-one except me. It belongs to my landlord. 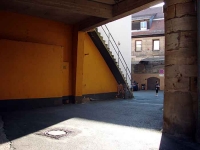 Finally, now looking from the east and Fürther Freiheit back to the Park Hotel. It’s not listed – it was originally completely different. Only the ground floor is now partly inhabited by McDonalds. I think the shell may be 1950s. It will be a loss. Yet another view of the charming Commerzbank.

There are some design drawings in the Fürther Nachrichten.

I’m writing as though the plan were decided, which it is not. Only 80% of the land has been acquired. There are tenants who need to be moved to cheap housing elsewhere and might refuse. I remember hearing stories from an estate agent on rehousing a large number of Turkish tenants who lived at cheap rents in the area where the City Center was built.