Bee sting cake seems to be what it’s called in the USA, when translated from the German.

Deb Perelman of Smitten Kitchen (the blog) has created one, but it doesn’t look quite like the one I know:

The Bee Sting Cake (Bienenstich) is a German specialty and while my mother’s parents came over in 1935 and 1936 respectively, the areas once known as German epicenters (the middle of Queens, where my mom was raised, and Yorkville, in the Upper East Side of Manhattan) have now mostly dispersed, and most of the accompanying stores have shuttered. Calls to German bakeries to see if they sold it were almost futile, until I found one in Ridgewood, Queens that sold us a whole one that was rather awful; let’s not speak of it at all. The only thing left to do was go it alone, researching obsessively along the way.

It actually looks to me as if the proportions of filling and pastry are reversed. this Wikimedia Commons picture looks closer: 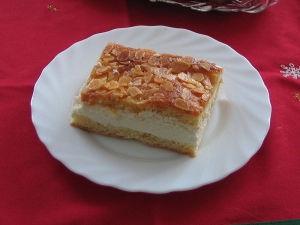 I haven’t had Bienenstich often. I don’t like the blancmange-type filling, but confectioners’ custard is OK.