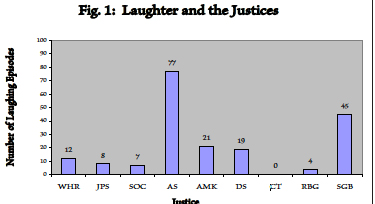 This diagram shows which of the Supreme Court justices (AS = Antonin Scalia) got the most laughs in court in the 2004-2005 term. The information was published by Professor Jay D. Wexler in Green Bag as Laugh Track (PDF file). That term was the first time that the Court Reporter started revealing when the public had laughed.

The data revealed the following results :

Why am I not surprised?

In view of the fact that Scalia speaks most, he wanted to check whether the figures were misleading. Scalia still came out top, but Thomas was not investigated because ‘He speaks so seldom as to make it pointless to examine his performance.’

Via Martin Gardiner in Improbable Research, with special thanks to Trevor in Barcelona.