Reading Udos tale yesterday, I remembered that one of my fellow articled clerks (trainee solicitors) in London later spent time in prison in connection with some financial schemes, probably with clients money. It would have been amusing to visit him, but I didnt hear about it till later.
Another one, Simon Zolan (a Czech name), apparently later worked for a commercial law firm with Spanish connections and is now running a flamenco school in Seville or Jerez (well, somewhere in Andalusia). He has red hair so his stage name is Simón el Rubio. The Internet is a great help in tracking these things down.

And I suspect that this David Fletcher is the right one, as he had spent a year in Finland before qualifying as a barrister and solicitor. (But the photograph must be the other man):

Mr David Fletcher, solicitor, who has lectured to Scandinavian audiences on these topics on numerous occasions. He combines legal qualifications and experience (he has also qualified as a barrister) with linguistic expertise. He specialises in Company/Commercial and UK and EU Competition Law. He gives contract-drafting courses in a number of different countries including Sweden, Denmark, Germany and Finland.

I think some of the articled clerks are working as solicitors, but Id better not out them.
I am also grateful to Friends Reunited in the UK, which found contacts with a number of people I was at school with. Since most of them had left the area and changed their names, there was no other way I could have done this. You can read the site free of charge, but to post it costs £5 per year for expenses.

One thing I have discovered is that if you scan old roll photos from school, bit by bit, enlarging them in the process of scanning, they are much easier to look at on screen than on paper. Here are some of the pupils of Squirrels Heath Junior School in Romford in 1956. 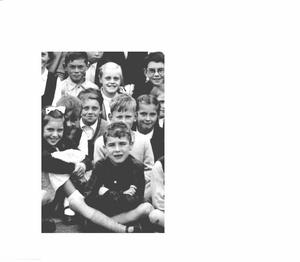