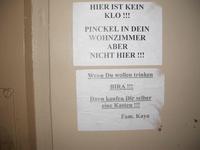 I am posting some pictures from a walk here in Fürth yesterday (click on image to enlarge).

Since the German spelling reform, we are approaching something like the 17th-century freedom to spell in whatever way we feel like spelling. I like the word pinckel, although I don’t think it’s logically spelt. I don’t like the punctuation, although at least there are never more than three exclamation marks.

This picture may be evidence that this kind of German is used by speakers of German as a second language themselves sometimes, and not only by Germans when talking to foreigners.The pinckel spelling is not in Das Rechtschreib-Wörterbuch by Professor Theodor Ickler of Erlangen University (who used to sit in on our oral exams for translators at Erlangen, when a neutral civil servant was needed). Ickler came to the fore in the heady days of protest against the new spelling rules. I see there is a forum where disputes still continue, and participants address each other as Herr X and Frau Y. Ickler’s dictionary (apparently a new edition is planned) is purely a spelling dictionary, plus a long introduction, attempting to modernize German spelling in a more intelligent way than the Rechtschreibreform.

Here is a page with a bibliography on the new rules: