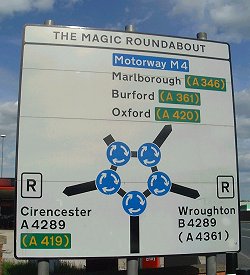 This picture of the Magic Roundabout sign (Bennets End Counterflow Roundabout) was taken from the SwindonWeb site, where there is also a good aerial photo.

In Britain there are huge counterflow roundabout systems, like the Bennets End one. You have four or five mini-roundabouts embedded in a big roundabout. I wish some of the ‘German’ drivers I encounter on my drives could be sent to one of them.The site with the Bennets End diagram was written by an American who also sells a book on Driving in Britain.

Mini-roundabouts are becoming more common in Germany. Here’s a picture of one in Waiblingen. This is just marked until they see how well it works. Big building contractors’ lorries are supposed to drive straight across, and so apparently do half the car drivers. The newspaper suggested putting up a fake policeman (Polizistenattrappe) in the middle, but to date this idea has not been taken up.

5 thoughts on “Driving in Britain / Fahren in England”