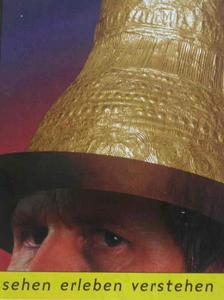 I want one of these hats for Fasching/carnival. Mind you, there isn’t much tolerance here for unusual costumes.

In 1996, an art dealer phoned the director of the Berlin museum of archaeology and early history and offered him an object for 1.5 million DM. The photo showed something the museum eventually decided to buy, when they discovered it wasn’t a fake: the fourth golden cone or hat ever to be unearthed: Bronze age artifacts had been found in Avanton, Schifferstadt and Ezelsdorf. The site where the fourth hat was found is unknown – see the earlier entry on treasure trove law in Germany.

Since the 1996 discovery, it’s been possible to interpret these cones as the hats of some kind of priest or wizard, and the symbols on them relate to the sun cult. The hats are all of paper-thin gold and originally had brims. The exhibition at the Germanisches Nationalmuseum in Nuremberg unfortunately finished yesterday, so this link may not remain: it has pictures of all four cones. 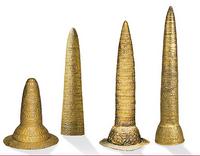 And here is an article in German about them, and an English-language press release from the museum.

The exhibition was in a darkened room with a spiral path leading onwards and upwards to the four cones. There was a video showing reconstructions of Bronze Age life, and bizarre improvisions on the lur (German Lure), a mysterious Bronze Age horn-like instrument played by one Joachim Schween, a musical archaeologist who appropriately lives in Hameln (Hamelin). An excellent exhibition.

Picture of the lure and small audio clip of fruitier tones than Professor Schween produced.
Bronze Age links
Phluzein, an archaeology blog that doesn’t even touch on this subject but looks interesting.